The US Patent & Trademark Office has published a new patent application from Apple which shows an all-new iPad Smart Cover, that has been designed to double as a multi-touch gesture keyboard eliminating the need for a touchpad, PatentlyApple reports. The new Smart Cover has an interior surface that attaches to a rear surface of the iPad and to the rear surface of a keyboard that communicates with the iPad. 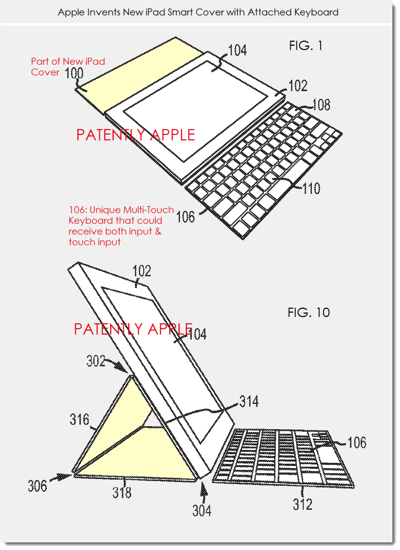 The above two figures show a perspective illustration of the new iPad Smart Cover with an attached keyboard as well as an illustration of a standing configuration for the cover. The filing notes that keyboard aspect of the smart cover will communicate with the iPad wirelessly, most probably over Bluetooth. Also, the keyboard may be a multi-touch keyboard with a transparent or semitransparent touch sensitive panel, allowing it to receive both keyboard input and touch input.

Apple credits John Elias as the sole inventor of this patent application, which was originally filed in 2012.