Telecom analyst Rod Hall, who replaces long-time Apple analyst Mark Moskowitz at J.P. Morgan, believes that he has a $63-billion idea for Apple. “All it needs to do is put a keyboard on the iPad”, said the bank’s new Apple analyst adding that Apple could make as much as $63 billion a year in the laptop market, Fortune reports. 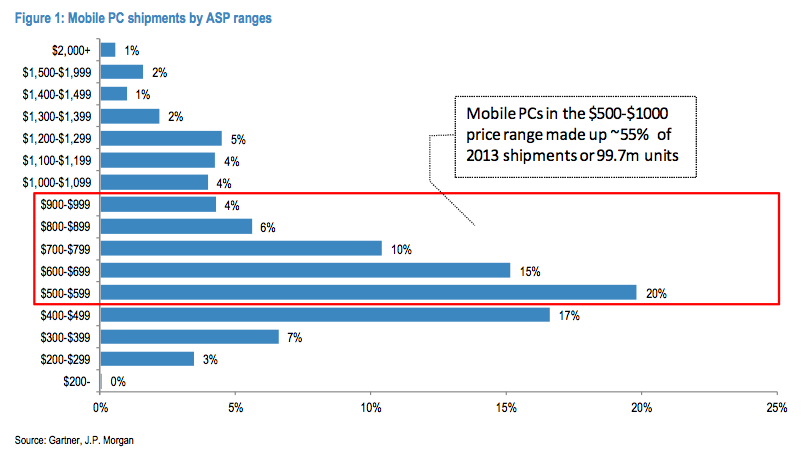 In an inaugural note to clients yesterday, Rod wrote that Apple owns the market for laptops priced above $1000, with an estimated 68% market share of the North American market, a 49% share in Western Europe and a 36% share globally. However, the analyst notes that the sweet spot for laptops sits just below that price point. In the $500-to-$1000 range, nearly 100 million laptops i.e 55% of the total market, were shipped in 2013. So if Apple would just put a keyboard on the iPad, Rod says, it can be “Apple’s iAnywhere solution”.

“While some iPad users are replacing laptops with the device we believe that most use the iPad as a supplemental device to either a laptop or desktop PC. If iAnywhere allowed these users to flexibly use an iPad as both a PC and a Tablet we believe that many would elect to simply own one device. We also believe that many users currently purchasing lower priced laptops from vendors like Dell would choose to switch to Apple.”

The analyst also mentioned that HP is the biggest player in the “$500-$1000 sweet spot” laptop market, followed by Lenovo, Dell, ASUS and Acer.