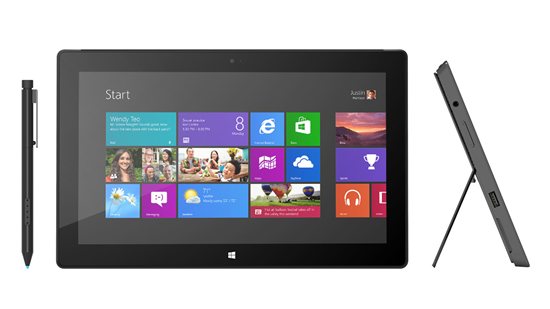 In January, Surface with Windows 8 Pro will be available in two versions and pricing will start at $899:

Both versions will both include a Surface pen with Palm Block technology and include the ability to use a Touch Cover or Type Cover (sold separately).

The differences compared to the Surface RT is that the Surface with Windows 8 Pro comes with an Intel Core i5 processor and will run current Windows 7 desktop apps, so Microsoft proudly claims “it’s a full PC AND a tablet.” Also, the $899 starting price does not include a Touch Cover or Type Cover ($120-$130).

As for battery life, the official @Surface twitter account revealed the Surface Pro will have half the battery life of the Surface RT (which has been tested at 8-9 hours of battery life), so we can assume it will be 4-5 hours:

@shahroom Hey Shahroom, #Surface pro will have approximately half the batter life of Surface RT.

According to AnandTech, the major differences between the Pro and RT when compared are:

Surface Pro keeps the same display size, but increases tablet thickness by 43% over the RT version. Weight is also up by half a pound. Screen resolution goes up as well, at 1920 x 1080. Memory capacity also increases to 4GB, and Surface Pro comes with much more NAND on-board.

Anyone interested in the Surface Pro to replace their iPad? Does Microsoft have a winner here?