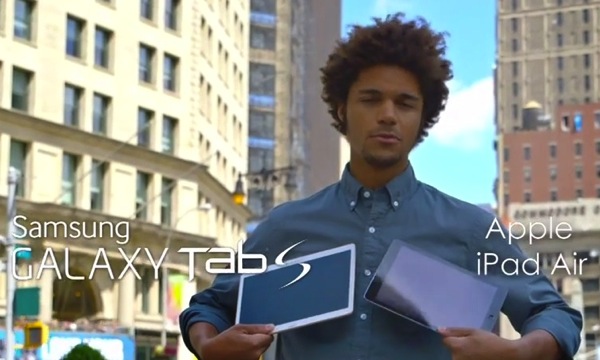 Samsung’s latest Galaxy Tab S ‘ad’ takes to the streets of New York City to ask people which tablet they like better: the Tab S or Apple’s iPad Air.

Unsurprisingly, every single person in the ad spot said they would choose the Galaxy Tab S over the iPad Air, since the former has more pixels in its display and according to Samsung is “Thinner. Brighter. Lighter.”

Here’s what The Verge had to say in its review of the Galaxy Tab S:

For everything that Samsung got right with the Tab S, it feels like there’s something else it just didn’t pay enough attention to. Samsung seems to be once again targeting the iPad, but focusing on all the wrong things. It’s lighter and has a better screen, sure, but it also feels cheaper and can’t compete with Apple’s tablet-app ecosystem. There’s only so much software hand-waving that Samsung can do to try to make up for that last fact. But creating more elegant hardware is fully within the company’s control, and it just hasn’t done that here. For the same price as the equivalent iPad, the Tab S should have hardware that’s as good as the iPad, and it doesn’t.

Instead of actually showing how the Galaxy Tab S can make your life better, the ad just says it’s better than the iPad Air in terms of specifications. I wonder how many people chose the iPad Air during their ‘tests’ and the footage didn’t make the cut?