Cooke told the “Roger & Marilyn” show on Tuesday morning the free Star Touch iPad app is “doing for news what Cirque du Soleil has done for circus.” The app, which Cooke says debuted at number one in the Canadian App Store under free iPad downloads (it currently is in the sixth spot), is so new and exciting “you can’t step away from it.” 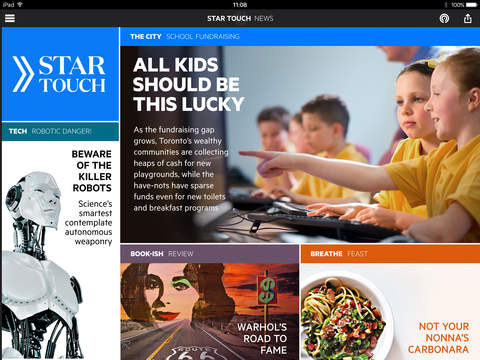 Star Touch launched September 15 as a free app, delivering digital news to customers via push notification by 5:30AM local time. The app brings local, world, sports, business and entertainment news, bundled in a unique format that’s interactive with lots of photos and videos.

The editor said Star Touch has “been selling like hotcakes”, while also noting ads are interactive and “a lot of fun.”

The publication said the launch of Star Touch also saw the addition of young journalists to to the Star newsroom, changing dynamics of the group as it “brought our age down by a couple of decades.”

Cooke gave the hosts free iPads and also one to give away to listeners, calling the new app “a great step forward,” despite still sticking to the newspaper’s core, which he says is investigative reporting and great stories.

Last year, The Star announced it would end its digital paywall and focus solely on Star Touch, investing $14 million to build the app—which also includes joint marketing with La Presse.

We tested Star Touch briefly on our iPad and it’s definitely a great start for a newspaper app. It presents stories in a creative way that’s very interactive, like a magazine instead of a newspaper. As for the ads, the publication has seamlessly integrated them into the app, making them feel like they’re part of the experience.

Click here to download Star Touch for iPad—it’s free. What do you think of Star Touch so far?