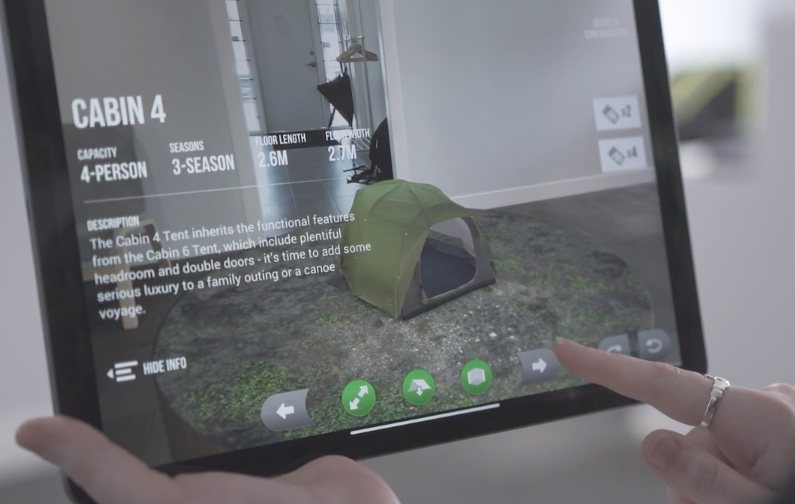 The latest flagship MEC store in Toronto opened its doors this past weekend and is leveraging augmented reality to help customers shop for tents, thanks to a new iPad app created by Vancouver-based Finger Food Studios.

Using its own photogrammetry studio in the Finger Food Studio’s Holodeck, the Vancouver company captured ‘thousands of pictures’ of objects for sale at MEC, in particular, the latter’s top-selling tents, to place them into an augmented reality view.

The process allows MEC to showcase any tent in its inventory for customers, “without changing the store layout or footprint.”

“The customer wants to be able to see and ‘explore’ each tent in their decision-making process. This new AR experience allows customers to do just that with all the tents, in unprecedented detail, on a mobile device. This experience integrates well, in to our new Queens Street West flagship store,” said MEC CEO David Labistour in a statement.

In a statement to iPhone in Canada, Finger Food said, “The feedback we received was extremely positive and Finger Food Studios are now working with MEC to determine what it will take to create a consumer app that is published in the app store and ultimately let them make purchases.”

A potential consumer app can be delivered via virtual reality goggles or via iOS and Android apps. No word on whether a green light will be given to release the app for all consumers.

Update April 17, 2019: Finger Food Studios CEO, Ryan Peterson, further told iPhone in Canada, “Our vision is to give consumers a unique, personalized, immersive shopping experience that increases revenue for our clients. The foundation of this is our proprietary, scalable 3D asset creation pipeline which is powered by Microsoft’s Azure Platform. For MEC’s flagship store launch we targeted iOS for the user interface – iPad specifically – to see how consumers would respond to shopping in this novel way.”