Canada had factory unlocked iPhone 5 units available for pre-order from the start, unlike our American neighbours down south. Finally it appears our friends in the US finally can get an unlocked iPhone 5 as Apple.com has now made them widely available.

Unlocked iPhone 5 pricing is actually $50 cheaper than Canada starting at $649 for the 16GB model and is the AT&T GSM version. So that means if you buy one down in the States you will be able to use it back in Canada on our LTE networks. 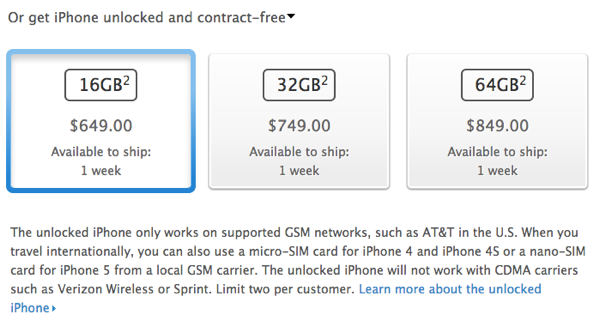 9to5Mac reports US Apple retail stores will also be selling them soon, with no exact date but stock arriving at locations. We reported on a tip received in late October Apple Stores in Canada would sell unlocked iPhone 5 units in mid to late November, but nothing has materialized yet. Stay tuned.