As with most tower defence games, the objective is to prevent a series of enemies from moving to point B from point A before you run out of lives (20 given in PlanetSave). You accomplish this by creating a maze of weapon towers in which the enemies must navigate through, but as enemies become stronger, so must your strategy.

In PlanetSave TD, players battle aliens to get points by using six different weapon towers, each with a varying degree of effectiveness, capability, and cost to purchase. To better battle the alien enemies, players may upgrade their towers to Level 3. With each upgrade, the towers become more effective at their attacks, but upgrades do have a cost. 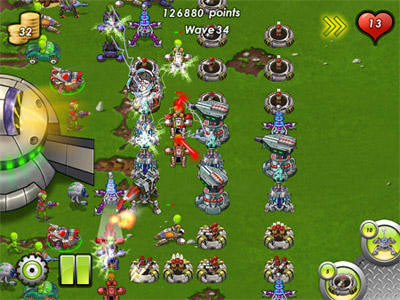 The game also features three stages with easy, medium, or hard difficulty. In each difficulty, the enemies start out relatively easy, but become progressively more difficult. Some enemies are also immune to specific weapon towers and feature properties such asÂ invisibility or increased speed.

Speaking with the developer, I was happy to hear that they are using the early days of the release as a testing period by looking for feedback from players regarding the gameplay balance. The developer also states that a new version will soon be released featuring bug fixes and also making the ‘easy’ difficulty slightly easier (I’m actually thrilled by this because in Easy mode I cannot get past wave 15!).

Note: The game is a universal iOS app. So you can buy it on iPhone and use it on your iPad!