Has iOS 7 been jailbroken already? According to the following screenshot posted by Canadian jailbreak developer Ryan Petrich, it may seem that way. Last night Petrich sent out a tweet with a screenshot of an iPod touch screen showing ‘System Version Too New’ as part of a pop up warning from his Cydia tweak, Activator: 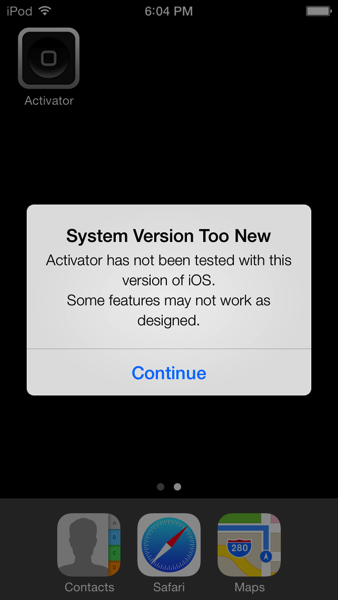 The screenshot shows three icons from iOS 7 in the dock but nothing more. So far a jailbreak only exists up to iOS 6.1.2 via the evasi0n jailbreak tool. Let the speculation begin whether a jailbreak exists or not for iOS 7. We’ve reached out to Petrich and asked if it was actually from a jailbroken iPod touch on iOS 7. Stay tuned.