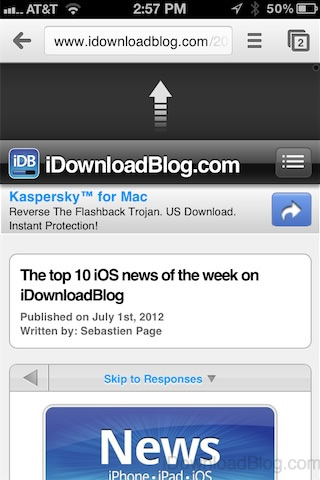 Since Google Chrome for iOS was released, more and more iDevice users have been letting Safari collect dust as they use the new browser. Although Chrome has quite a full feature set, it is missing some of the Cydia tweaks that you can get for Safari.

iDB is reporting that there is a new tweak coming tomorrow called Chromizer that adds a few new features to the iPhone and iPad version of Google Chrome for iOS. The iPhone version will get “Pull-to-refresh” and full screen mode. The iPad version will get these features as well, but it will also get the iPhone version’s tab view. iDB got to take an early look at this tweak, and made this video to show us what is to come:

Chromizer should be available in Cydia tomorrow in the ModMyi repo, for free.