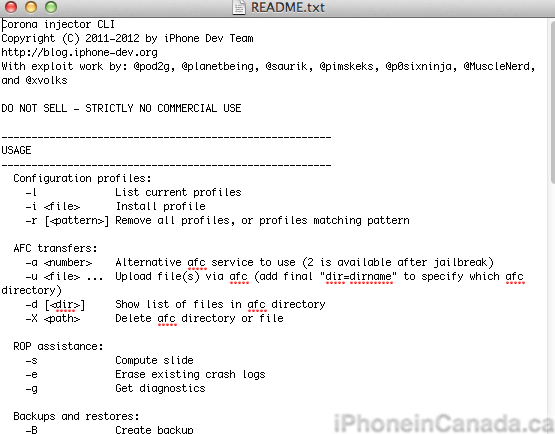 The iPhone Dev Team, as part of their initial blog post that detailed today’s Absinthe A5 jailbreak tool, has released their command-line interface (CLI) to jailbreak the iPhone 4S and iPad 2:

iPhone Dev have also incorporated the exact same flow into an alternative command-line interface (CLI). This will allow us to help users through individual steps of the jailbreak manually, to both help the user and help improve the overall flow.  Although the CLI will also allow the user to perform the entire jailbreak from beginning to end, we anticipate it will be more useful in debugging the occasional errors.  The CLI currently has over 20 individual options (in addition to the single “jailbreak” option) that should be useful during debug after the GUI release.

The release was noted as part of an update on the iPhone Dev Team blog:

The OS X version of the CLI mentioned in the post can be downloaded here.  It’s primarily to help us debug specific issues, but tinkerers might like to play around with some of its advanced options!  More info is here.

The CLI jailbreak is for advanced users–so only use it if you know what you’re doing.