The evad3rs jailbreak team has released evasi0n 1.5 for download. This latest version includes improved boot-up times for your iOS devices after the jailbreak and also has an brings an updated Cydia package list. The change log notes:

Evasi0n 1.4 was released four days ago with support to jailbreak iOS 6.1.2.

Prior to the release version 1.5 above, there was an evasi0n 6.0-6.1.1 Untether update in Cydia available, version 0.4-1, which says it “helps fix booting problems that were happening during some reboots.” 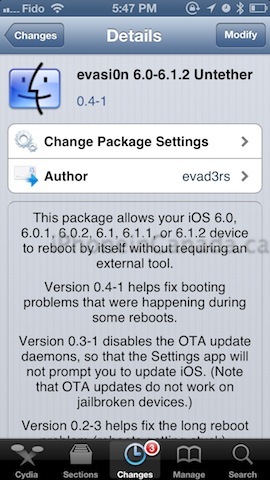 So be sure to install this update as it should fix any boot problems you may have encountered.