Looks like Sunday isn’t going to be ‘fun day’, but that’s not going to be a problem for many. The @evad3rs jailbreak team just tweeted they have entered its “final testing and preparation” phase and said the release will be coming tomorrow.

Final count down toward tomorrow’s release has begun!

The website now shows 90% completion with the next step being “release!”: 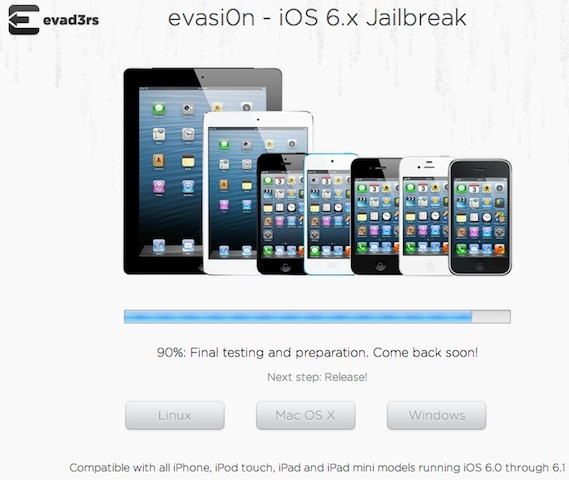 There’s no timeframe on the exact availability of the launch, but we’re guessing it will come in the wee hours of Monday night, probably after midnight Pacific Standard Time. To prepare for the jailbreak, you should restore to iOS 6.1 via iTunes and remember to turn off your passcode lock prior to attempting the jailbreak, according to the evasi0n.com website. Stay tuned!

We didn’t change any release dates. It’s silly to try to find “hints” from day 1… when we have no idea when we’re going to be done.

Yes, tomorrow is a concrete release date. It’s also the only release date we’ve ever given. 😛

Update 5: Now at 94%…(this will be our last percentage update; the release is imminent!)