We broke the news about the ‘connection’ between the departure of Peter Hajas from his MobileNotifier project and his possible move to Apple. To celebrate before his leave Peter and his team have released MobileNotifier Beta5, the final release.

– MobileReply. Reply to text messages while within other applications! It works like magic! 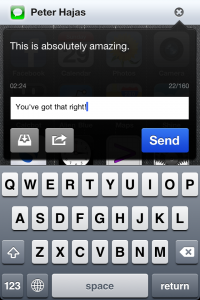 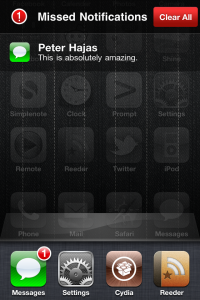 – Dismiss alerts right from the popup! Hate going into the dashboard to remove alerts you’ve just archived? Simply hit the “X” in the popup to dismiss them for good!
– Recall the most recent alert easily with an Activator action. Then use MobileReply to reply to it!
– Thanks to work by Marc Easen, MobileNotifier now supports calendar invitation alerts!
– Way way faster.

What’s been fixed?
– Lockscreen no longer displays if you have it set to “off”
– Various small bugfixes.
– Did I mention way way faster?
You’ll need to reconfigure your Activator actions for MobileNotifier.

I just installed this new release and it’s much more refined than before. The ability to reply right within the notification brings BiteSMS-like functionality. The alert display has become much less intrusive too. Well done.

Here’s a video of Peter giving a demo:

Let me know what you think about this latest release. Do you think we’ll see subtle hints of these notification styles in iOS 5?