With the release of iOS 5 Beta, the iPhone Dev Team was quick to immediately release a tethered jailbreak via redsn0w. Just as fast as the jailbreak was released, 3rd party developers went right to work and as noted by 9to5Mac, the ability to develop notification widgets was discovered to be possible (thanks to the work of @chronic).

So as expected, the first third party notification widget was released today, called UISettings. Essentially this is the equivalent of SBSettings, the must-have tweak for any jailbroken iPhone. Instead of swiping along the top, UISettings is accessed via the new Notification Center. You’ll be able to quickly toggle services such as WiFi, Bluetooth, Airplane mode, and more.

How to download UISettings? Easy. Just add the following repo to your Sources in Cydia: http://qwertyoruiop.com/beta and you’ll get access to download it. The server might be slow as you can expect it’s in high demand.

Check out the following screen via FSM: 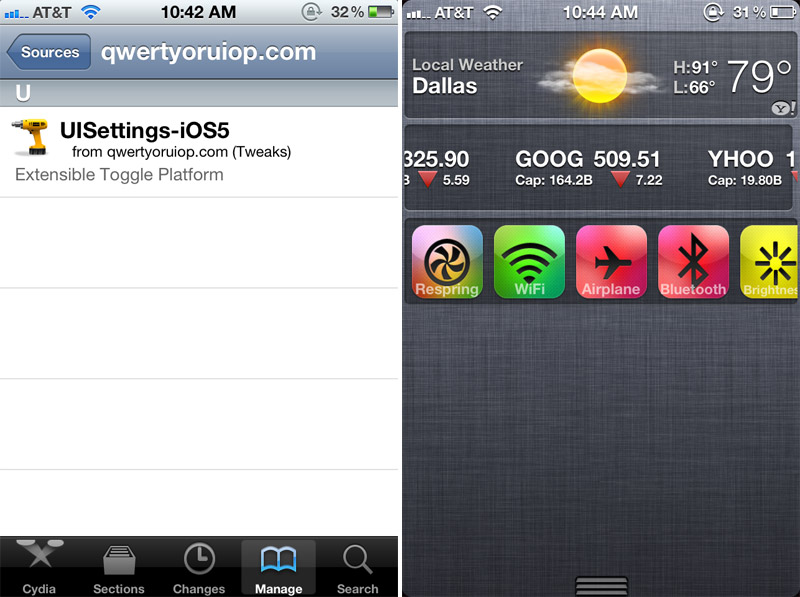 This is exciting stuff. Think about all the possibilities that will come after this. Have you tried this yet on your jailbroken iOS 5 Beta?