Zeppelin is a brand new Cydia tweak from iOS developer jivhg which lets you choose cool custom logos for your iOS device’s status bar by replacing the default carrier name. Once you download and install Zeppelin from Cydia, you will need to respring your device once to get a new tab in the Settings.app. You can easily enable or disable Zeppelin from here as well as choose from a host of cool logos which you can instantly put on your status bar in place of your carrier’s name. To choose a different logo, simply select it and respring your device for changes to take effect. 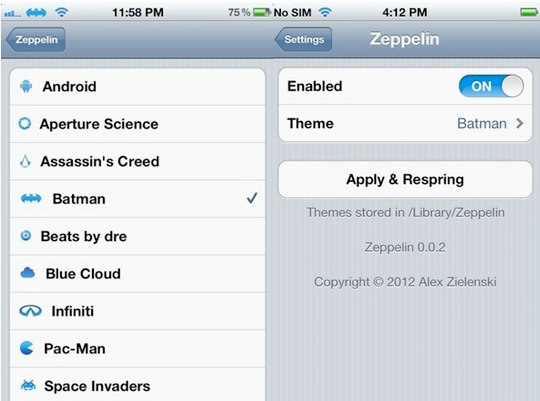 You can use your own icons as well. Simply transfer them to /Library/Zeppelin folder on your device. Below is the list of logos that are installed with the app:

Zeppelin tweak is fully compatible with iOS 5.0.1. You can download it for free via ModMyi repo in Cydia.