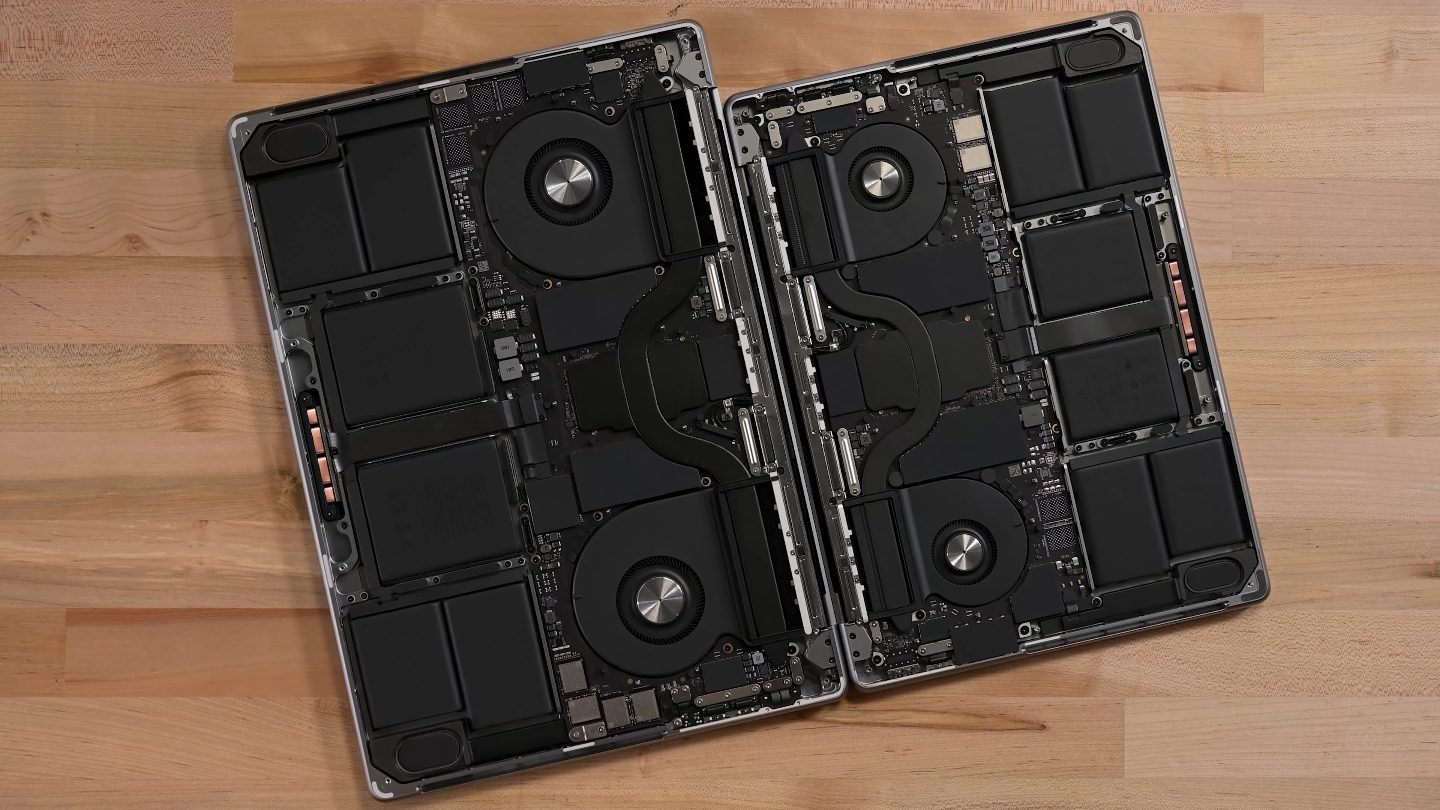 Earlier this month, Apple unveiled new 14″ and 16″ MacBook Pro models with next-generation M1 Pro and M1 Max silicon inside. The notebooks have finally received the famed teardown treatment from the repair experts at iFixit, who recently documented the process in a YouTube video and delivered a ‘Repairability Score’ for them.

The first thing the teardown experts noticed is that the bottom is as tough as ever to take off. It’s held down by eight pentalobe screws, but is also secured with two clips on the inside and a row of metal teeth along the top edge.

Apple has (thankfully) ditched glued-in battery packs for a battery with iPhone-style adhesive with pull tabs, making the battery easier (and a lot cleaner) to remove and/or replace.

iFixit lauded Apple for bringing back more ports, (most of) which are now modular and a lot easier to replace. Looks like Apple finally realized the professionals it targets with the MacBook Pro need modular, easy to replace ports.

The modular ports are, however, screwed down under the logic board, so you’ll still have to extract the logic board if you want to replace any of them.

Here’s a definitive list of ports on the 2021 MacBook Pro that are actually modular:

The HDMI 2.0 port and SD card reader are soldered onto the main logic board, and are therefore much harder to replace.

As for the display, it’s stunning on the outside, and slightly less of a pain to play around with on the inside.

The display cables connecting the screen to the chassis are still unfortunately built-in to the screen itself, but do have a lot more slack to them now. This should prevent a repeat of the infamous ‘Flexgate’ display failure issue from 2019 surrounding MacBook Pros, which Apple was ultimately forced to address.

The score includes a penalty for having integrated, almost impossible to replace key components like memory and storage, but if iFixit determines that comparable performance can truly not be achieved in a laptop with socketed components, they may adjust the score accordingly.

Finding comparable performance in a laptop might be a tall order, considering The Verge called the 2021 MacBook Pro models “the most powerful laptops” they’ve ever seen in their recent review.

Sales for both the 14″ and 16″ 2021 MacBook Pro launched in Canada on Tuesday — click here to get yours today from Apple.ca.

Watch the full teardown video from iFixit above.