Last month, it was reported that the widely rumoured 12-inch MacBook Air will enter mass production in the first quarter of 2015 and today, the folks over at 9to5Mac seem to have obtained what they believe are the very first renders of the upcoming, all new 12-inch MacBook Air, that appears considerably smaller than the current 13-inch version.

What’s really weird about the alleged device is that it features only one Type-C USB port, while the only other port on the device is a standard headphone jack. Absence of standard USB ports, SD Card slot, Thunderbolt and MagSafe slots makes the leak questionable. Although Mark Gurman does have solid sources, we just cannot fathom Apple releasing a MacBook with just one single USB port. What about MagSafe? 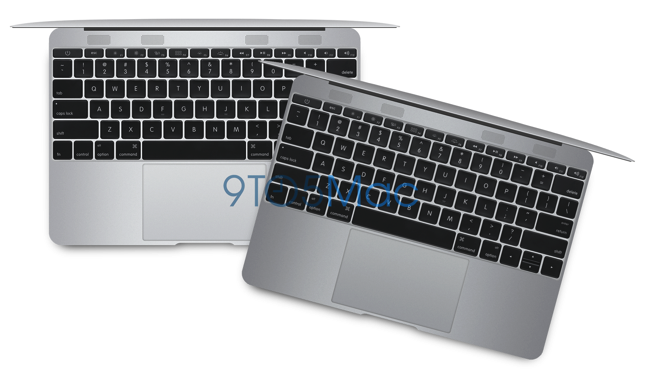 Looking at the alleged renders of the upcoming 12-inch MacBook Air, the bezels on the display seem to have been reduced on all sides. Also, the entire unibody appears revamped from the keyboard to the trackpad to the speakers. The keyboard sits edge-to-edge across the width of the laptop, while the entire key set has been redesigned so that each key sits noticeably closer together. “Apple has squeezed the keys closer in order for the computer to be as narrow as possible”, the source claims. In addition to the keyboard, the trackpad has been changed as well.

“The elimination of physical feedback in the click is part of Apple’s plan to reduce the thickness of the MacBook to a bare minimum. Taking cues from the current Air, the future model has a teardrop-like, tapered design that gets thinner from top to bottom. Above the keyboard are four redesigned speaker grills that actually double as ventilation holes for the fan-less device to keep cool.

The upcoming 12-inch Air has the fewest amount of ports ever on an Apple computer, as can be seen in the rendition above. On the left side is a standard headphone jack and dual-microphones for input and noise-canceling. On the right side is solely the new USB Type-C port. Yes, Apple is currently planning to ditch standard USB ports, the SD Card slot, and even its Thunderbolt and MagSafe charging standards on this new notebook”.

The report also claims that the upcoming laptop is so thin that Apple employees are referring to it as the “MacBook Stealth” internally. Well, take a look at the following images and tell us what you think of this one. 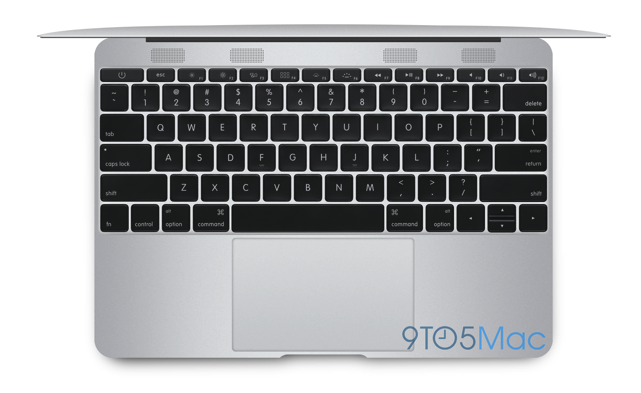