The world’s thinnest notebook was introduced today during the Apple event: the 13-inch Retina MacBook Pro is just 0.75-inch thin and weights just 3.5 pounds. It is 20% thinner  and almost a pound lighter than the previous generation 13-inch MacBook Pro model. 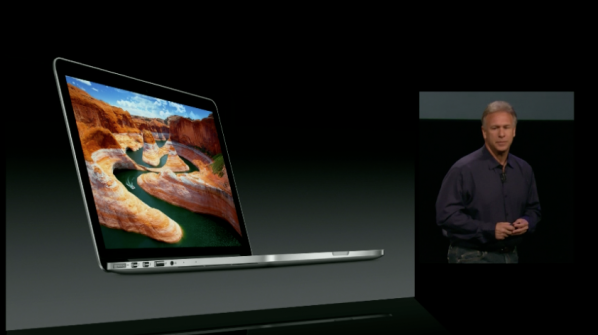 “The 13-inch MacBook Pro is our most popular Mac, and today it gets completely reinvented with a new thin and light design, fast flash storage and a gorgeous Retina display,” said Philip Schiller, Apple’s senior vice president of Worldwide Marketing. “With vivid colors, razor sharp text and more pixels than anyone else’s 15 or 17-inch notebooks, the Retina display completely changes what you expect from a notebook.”

The recently announced portable will be available today in the US in two configurations. The entry level features 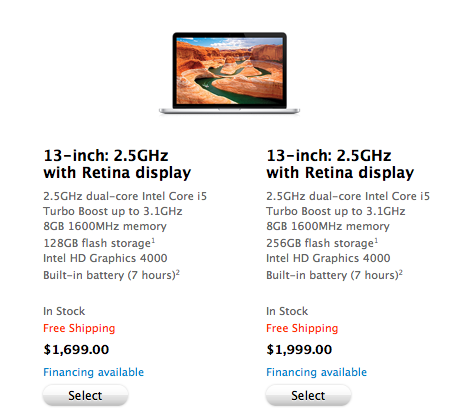 The 13-inch Retina MacBook Pro sports a 227 ppi, 2,560 x 1,600 pixels display with 29% higher color contrast and 75% reduced reflection. That is 4x the number of pixels than the previous generation model and almost double the number of pixels than an HDTV and uses IPS technology for a 178-degree wide viewing angle.  The world’s second highest resolution notebook has a MacSafe 2 port, two Thunderbolt ports a  USB 3 port, headphone and dual microphones on the left side and an SD card slot, HDMI and a second USB 3 port on the right side on the device and comes with a FaceTime HD camera.  The 13-inch MacBook Pro battery has up to 7 hours of battery life and can remain in standby for up to 30 days.

It ships with OS X Mountain Lion preinstalled, and it is available today from the Apple Store.