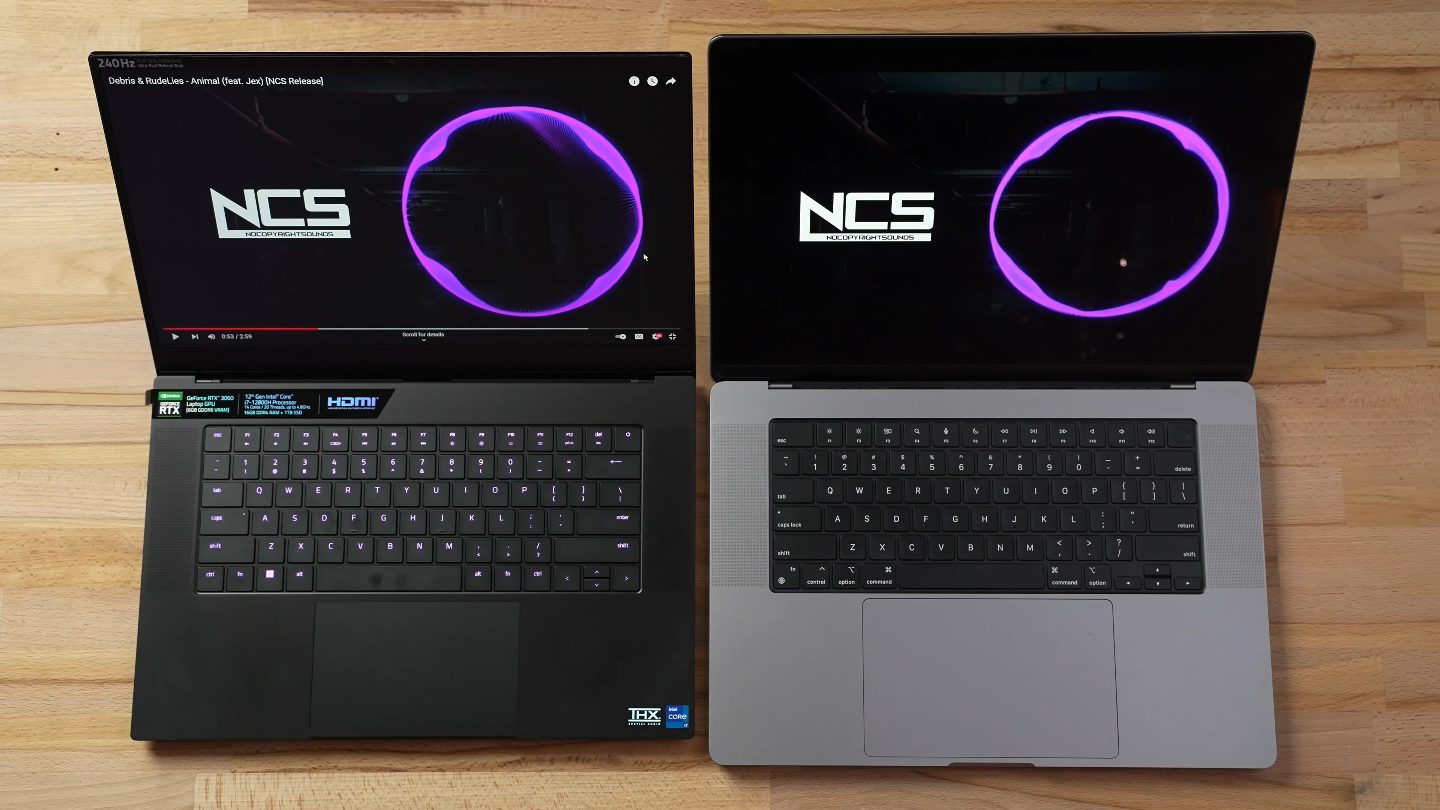 In a recently published video, YouTuber Max Tech pits a 16-inch MacBook Pro powered by an M1 Max chip against a 15-inch Razer Blade Advanced with a 12th-Gen Intel i7 12800H CPU and an RTX 3060 GPU, in everything from the display, battery, and speakers to raw performance.

The MacBook Pro’s speakers still reign supreme. While the Razer Blade is definitely louder, it lacks bass and can sound a bit tinny at times.

The MacBook Pro has a higher-resolution, more colour-accurate display than the Razer Blade, making it suitable for professional workloads. The Razer, however, offers a more gaming-focused configuration with a 1440p resolution and a whopping 240Hz refresh rate.

The dedicated RTX 3060 GPU schools the MacBook Pro in graphics performance, scoring 16,248 points in 3DMark as opposed to the MacBook Pro’s 10,432. The Razer Blade is the obvious choice for gaming.

However, there is a massive caveat to the Razer Blade’s performance. Razer throttles performance by about 20-35% (even up to 50% for graphics performance) when not directly plugged into power and using the battery.

The MacBook Pro, on the other hand, delivers comparable performance on both direct power and battery backup.

In everything from photo editing to 4K video editing, the MacBook Pro handily prevails over the Razer Blade, cementing Apple Silicon as the superior choice for productivity workloads.

Apple Silicon is pure performance, but that’s not even its defining factor — that would be its efficiency.  The MacBook Pro still draws less power and runs a lot cooler (and quieter) than the Razer Blade regardless of what you’re doing.

Check out the full video comparison below:

Apple will reportedly have a new Mac or two, and likely new Apple Silicon, in store for us at its ‘Peek Performance’ event, scheduled for Tuesday, March 8, at 10 a.m. PT/1 p.m ET. Stay tuned for our coverage of the event.