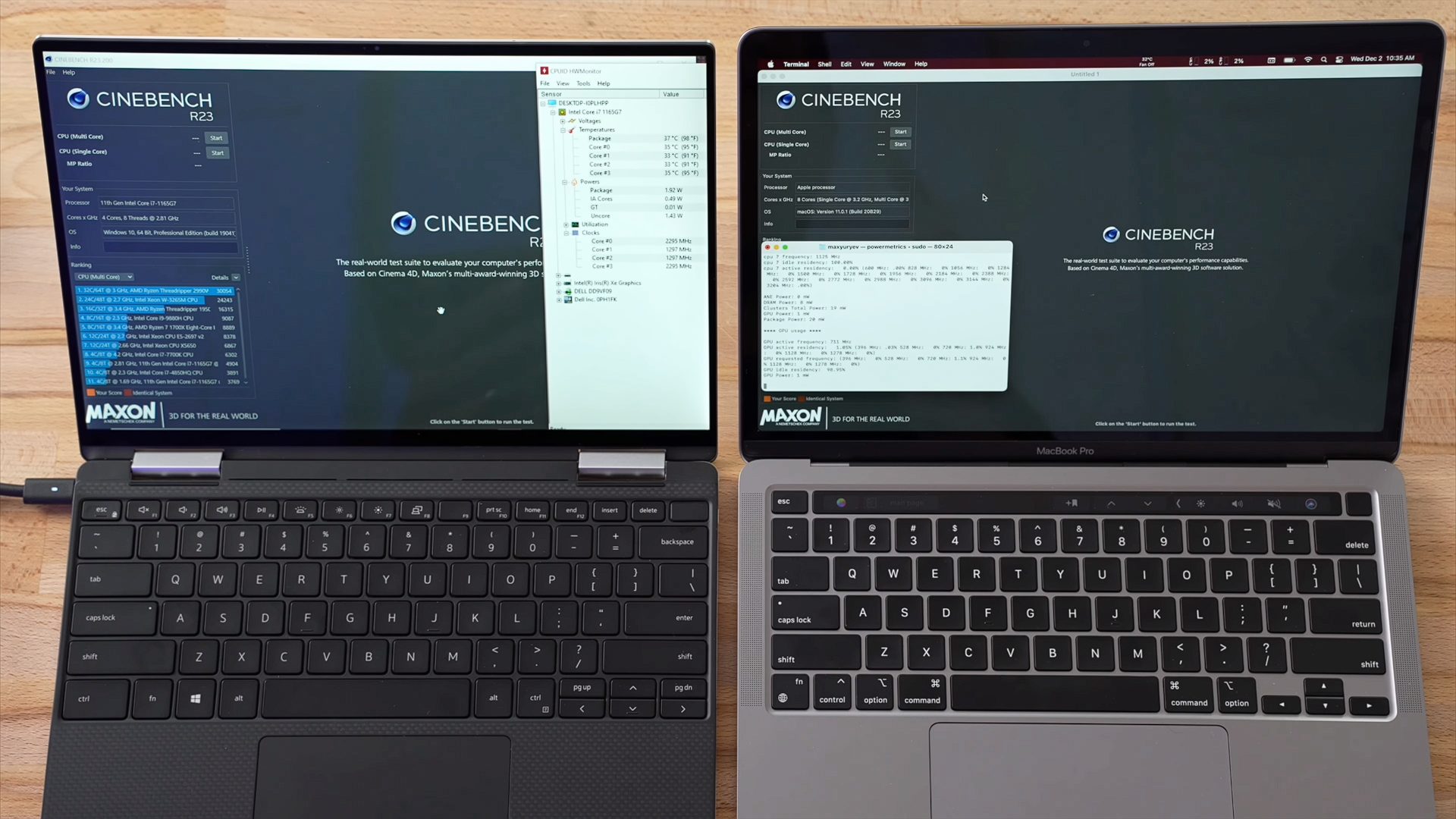 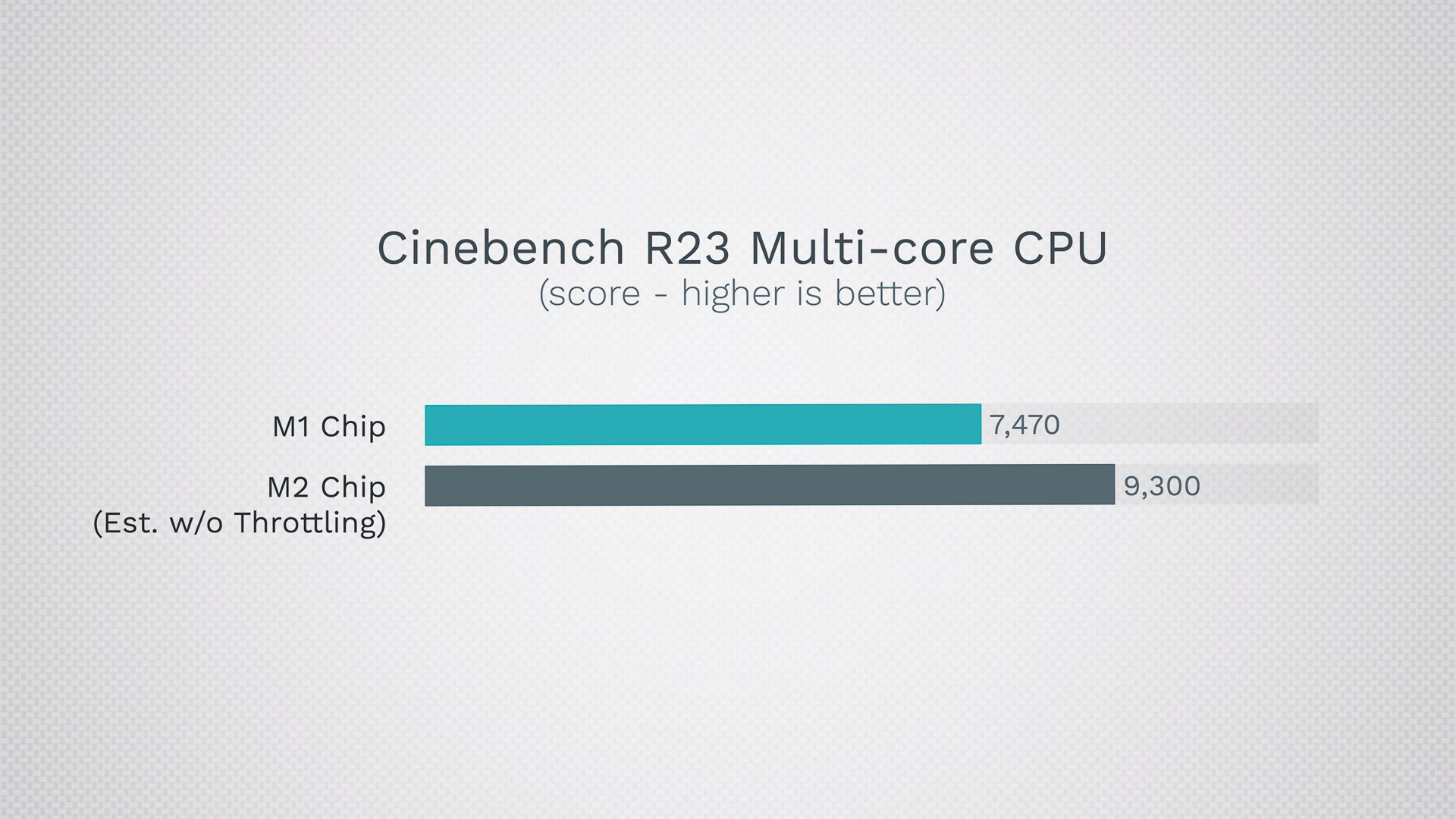 Graphics performance, on the other hand, actually gets a bigger bump from the M1. The M2 scored almost 45% more than its predecessor in Geekbench 5’s Metal GPU test. 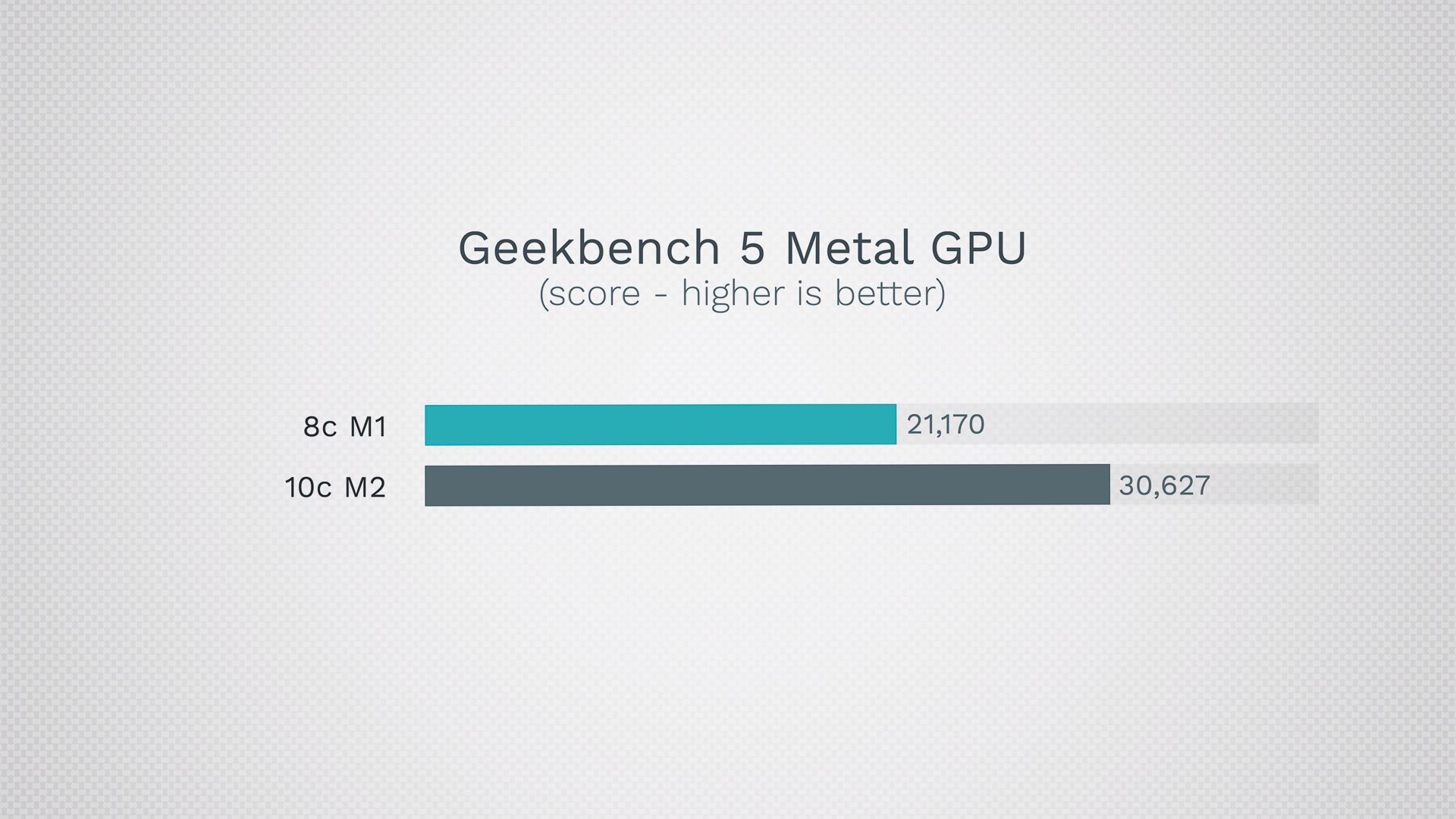 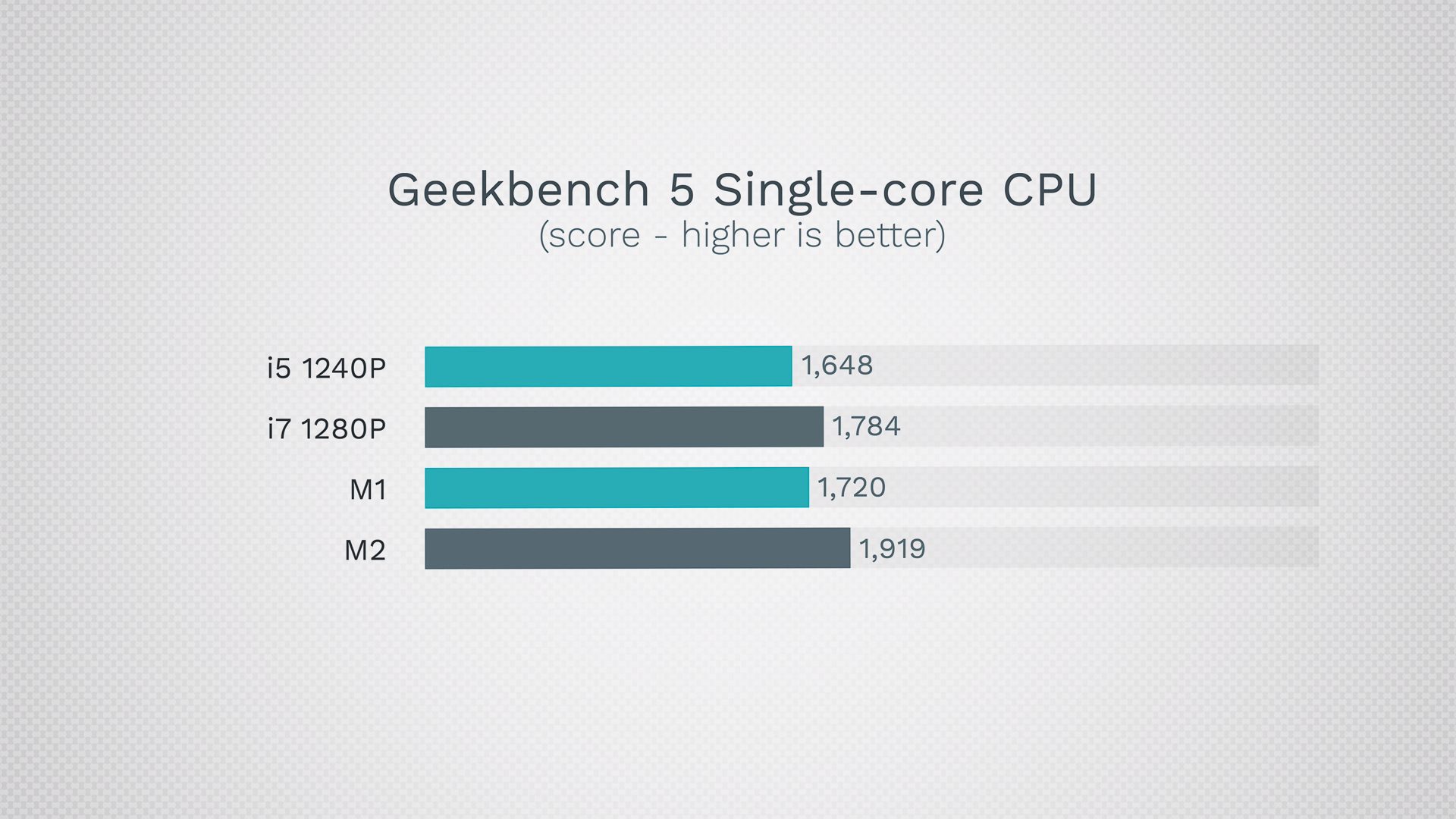 However, the 12th-gen i7 eked out a win in the multi-core test. 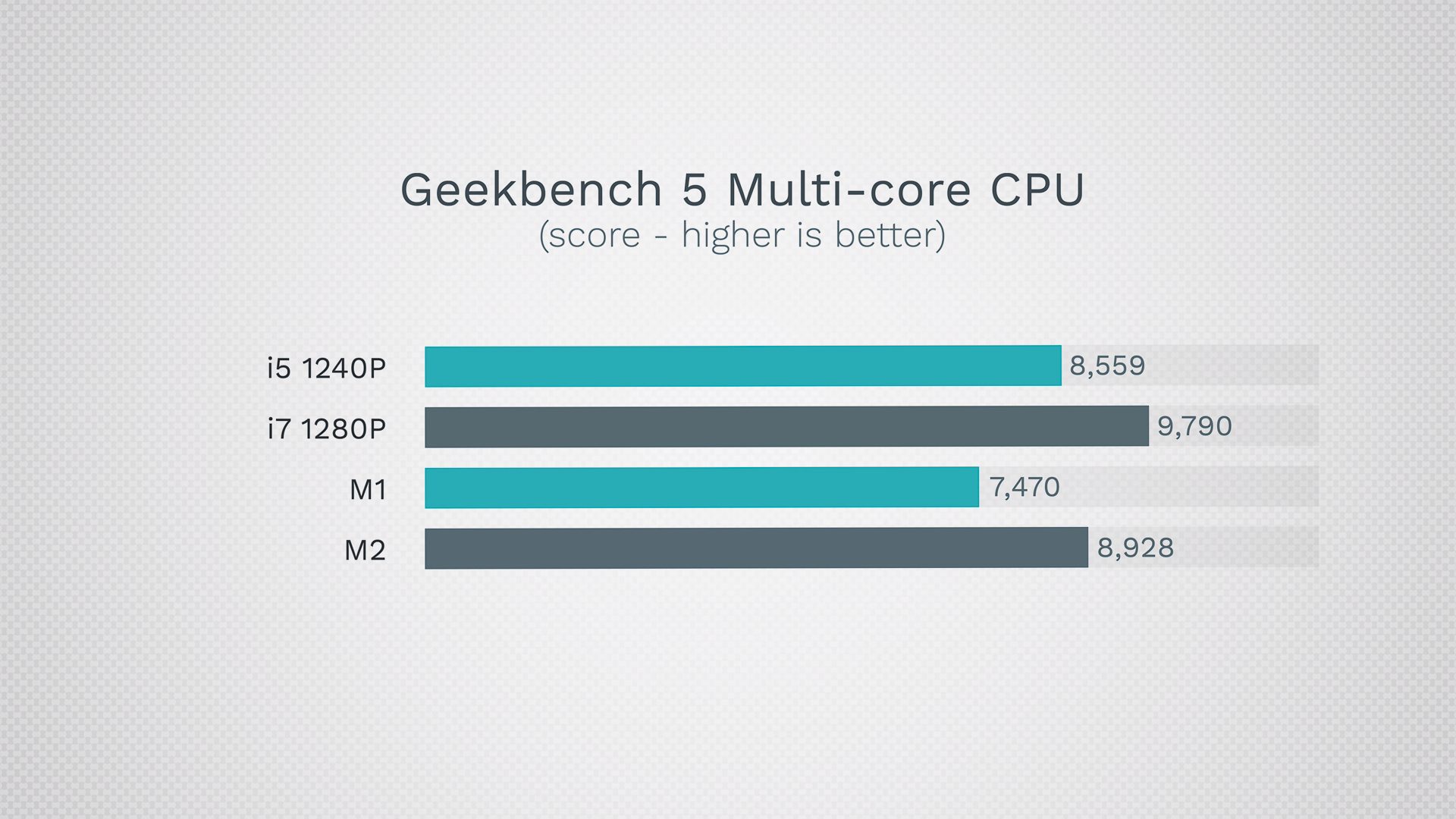 Unfortunately, Intel isn’t known for its integrated GPUs in the first place. To top it off, the company slapped pretty much the same GPU as its previous generation of laptop chips onto the 12th-gen roster.

In Geekbench 5’s Metal/Vulcan GPU compute benchmark, M2 delivered 1.5x the performance of the i7 1280P in the top-spec XPS 13 Plus.

M2 also offers more raw gaming horsepower (almost 2.4x as much, actually) than the XPS 13 Plus with a 12th-gen i7. What’s more, the M2 MacBook Pro absolutely dominates video editing.

To make matters worse for the PC side, these numbers reflect performance on wall power, not on battery. Dell’s XPS line, like almost all laptops with x64-based chips, throttles significantly when unplugged. On the other hand, the M2 MacBook Pro thrives on battery power and delivers essentially the same performance it does when plugged in.

An XPS 13 Plus with an i7 1280P can suck back anywhere between 28-65 watts of power in its stock configuration and up to 80 watts when unlocked. Meanwhile, Apple’s M2 is a champion of efficiency, with the MacBook Pro cranking out all of that performance with a 15-watt power envelope.

The XPS 13 Plus with Intel’s i7 1280P and a 3.5K resolution screen manages 4-6 hours of mixed real-world use on battery. The M2 MacBook Pro, on the other hand, sips battery and offers 9-11 hours under the same usage.

Check out the full comparison video below:

Max Tech has ordered an XPS 13 Plus for testing, so we should see a detailed, side-by-side comparison soon.