If you’ve been looking for a new iMac or MacBook, both Future Shop and Best Buy have various models on sale with savings ranging from $29-$50, which doesn’t seem like a lot but it’s still a discount. The sale starts today and goes until May 16th. 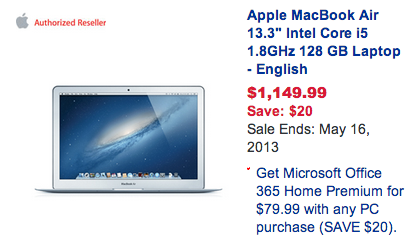 WWDC 2013 kicks off next month on June 10, where Apple is rumoured to announce a refresh to their MacBook line up. So if you want the latest and greatest, you might want to hold out for just a little longer.

Update: There is also a sale on the iPad mini for $20 off.