How IBM Converted a Windows-Centric Organisation to Apple 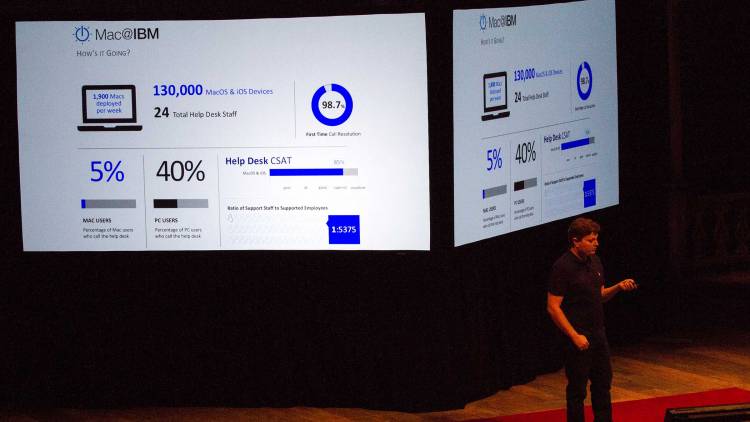 “Every Mac that we buy is making and saving IBM money”, said Fletcher Previn, VP of Workplace-as-a-Service and the man responsible for delivering a productive IT environment to IBM’s worldwide employees.

In his presentation at this week’s JAMF Nation User Conference in Minneapolis (via AppleInsider) he explained how IBM began to integrate the Mac platform into a half-million-strong, Windows-centric organization.

As he explains, the demand for Macs from employees was always high, but the company’s position was the usual cliché: The Mac was too expensive, challenging to support, and would require retraining of the help desk staff. By comparison, the up-front cost of PCs is low, but, as he later points out, it is demanding.

After meeting with Apple, IBM noticed something it hadn’t previously considered: Apple was managing a large number of devices with significantly less resources than you typically need in PC environments.

You know what happened: IBM and Apple made history with their strategic partnership, and IBM started its Mac&IBM program in June.

The results are simply amazing: Previn says IBM is deploying 1,900 Macs per week and currently have 130,000 Macs and iOS devices in the hands of users. And with the deployed devices come the stats: Only 5% of Mac users call the help desk, compared to 40% of PC users. Another interesting stat is that all the aforementioned devices are supported by a total of 24 help desk staff members, which means each member of staff effectively supports 5,375 employees.