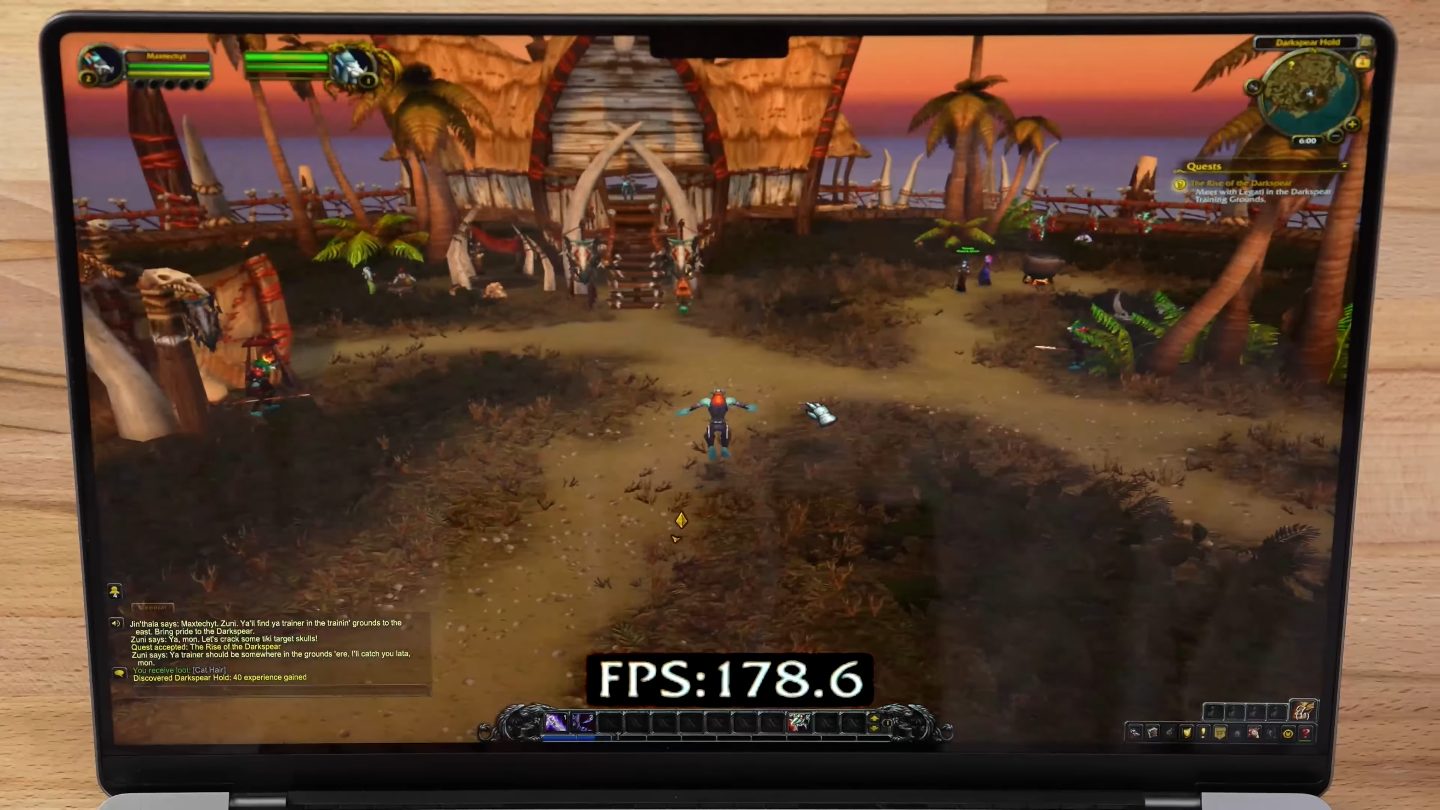 Apple’s new 14″ and 16″ MacBook Pro models with next-generation M1 Pro and M1 Max silicon are absolute beasts at productivity tasks, represent a completely new frontier for energy efficiency in notebooks, and blow the competition right out of the water in synthetic benchmarks.

The M1 Max chip has 10 CPU cores, and can be configured with either 16 or a whopping 32 GPU cores. The M1 Max has demonstrated solid gaming performance in tests, but how exactly does it handle the most popular game titles?

In a recently published YouTube video, Max Tech set out to determine exactly that, testing 13 popular titles on an M1 Max-equipped 2021 MacBook Pro.

WoW was the M1 Max MacBook Pro’s best result of the bunch, and was the fairest test as well, considering it was the only tested title that officially supports macOS. All of the other games Max Tech tested had to be run via a Windows VM in Parallels, x86 Rosetta translation, and/or apps like Crossover because they simply aren’t available for macOS.

The Witcher 3: Wild Hunt, an actual AAA title and gamer-favourite, delivered sub-par performance with a lot of stuttering at a 1728 x 1080 resolution and almost all graphics settings turned down to Low.

With considerable stuttering and frames dropping down to 25 FPS, Overwatch was all but unplayable — not because the M1 Max can’t handle it, but because it has to run the game itself, while maintaining a Windows 11 Virtual Machine (VM) in the background and translating the game’s x86 code into ARM at the same time.

Most of the other games tested in the video ran fine and were absolutely playable, with frame rates well above 60 FPS at the 2021 MacBook Pro’s native 3456 x 2234 native resolution, and even better performance at a reduced 1920 x 1200 resolution.

When The Verge called the 2021 MacBook Pro models “the most powerful laptops” they’ve ever seen, they were referring to pure processing power and productivity performance — not gaming.

Even though the 2021 MacBook Pros manage respectable gaming performance, the notebooks are tuned for professional workflows and most games just aren’t optimized for macOS, yet. Nonetheless, the tests are impressive showing how much the new MacBook Pro models can handle.

Catch Max Tech’s full gaming review of the M1 Max MacBook Pro in the video above.

If you’re interested in seeing how even more games run on the M1 Max, check out our coverage of YouTuber MrMacRight’s 25-title gaming review of the new chip.