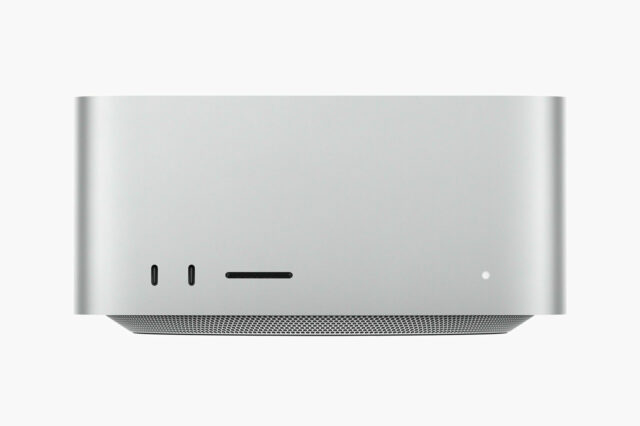 Update March 9, 2022: Apple has told The Verge why the M1 Ultra is 2 pounds heavier–it comes down to a larger copper thermal module:

They have the same 370W power supply. The additional weight is due to M1 Ultra having a larger copper thermal module, where as M1 Max has an aluminum heatsink.

The new desktop Mac is called the Mac Studio, and it’s like a Mac mini, but bigger—bigger in size and bigger in performance. The thicker desktop comes in multiple configurations based on Apple’s M1 Max and the new M1 Ultra processor, which doubles the CPU and GPU core counts of the M1 Max.

Since the M1 Ultra is essentially a pair of M1 Max chips working together, the Ultra also has double the M1 Max’s media enhancements, including four ProRes accelerators.

The M1 Ultra is a new design that uses “UltraFusion” technology to strap two M1 Max chips together, resulting in a huge processor that offers 16 high-performance CPU cores, 4 efficiency cores, a 48- or 64-core integrated GPU, and support for up to 128GB of RAM.

This, in turn, requires more cooling, and likely requires a beefier power supply, so one can safely assume that the added weight in the M1 Ultra Mac Studio is due to some combination of a larger PSU and a more advanced cooling system.

The Mac Studio is available for preorder now on Apple’s website, with availability beginning March 18.