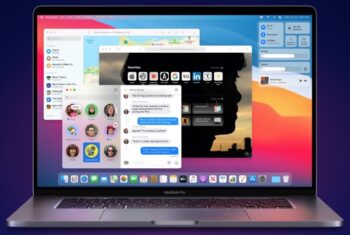 A recent post by John Gruber, Apple enthusiast and product commentator, on his blog Daring Fireball discusses what Apple executives had to say in response to theories that Apple designed macOS 11 ‘Big Sur’ for use with touchscreens.

In an interview with The Independent‘s Andrew Griffin, Apple execs Craig Federighi, Greg “Joz” Joswiak, and John Ternus — who are working closely on the company’s Mac line of products — iterated how off-course the idea really is.

“I gotta tell you when we released Big Sur, and these articles started coming out saying, ‘Oh my God, look, Apple is preparing for touch’. I was thinking like, ‘Whoa, why?’”, said Apple’s Senior VP of Software Engineering, Craig Federighi.

Following the release of new M1 Macs and macOS 11, many noticed that a lot of Big Sur’s aesthetic updates — like bigger, more spaced out buttons — brought its appearance more in line with Apple’s iOS and iPadOS, both of which are touch-operated.

And for many enthusiasts, these similarities surpassed what you would expect from two software products developed by the same company, leading them to believe that Apple is gearing up to make Macs touch-compatible.

During the interview, Federighi admitted that the changes make macOS 11 “perfect for manipulating with your fingers – but not because of some secret plan to change the way the Mac works.”

Federighi went on to say that they simply “designed and evolved the look for macOS in a way that felt most comfortable and natural to us, not remotely considering something about touch.”

This certainly does not mean that Apple has no plans for touchscreen Macs (we’ve been had more than once!) — all it means is that even though Big Sur borrows heavily from iOS and iPadOS in the looks department, it was not designed with touchscreen-capability in mind.