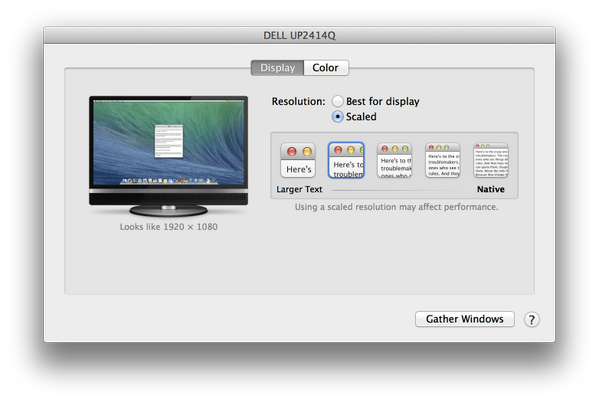 Apple has released Mac OS X Mavericks 10.9.3 beta to developers. The upcoming public release appears to have built-in support for 4K displays, 9to5Mac reports. The compatibility was discovered by @KhaosT and tested on both Retina MacBook Pro and the new Mac Pro with a connected 4K Seiki monitor over HDMI.

Prior to 10.9.3 beta, users with Macs connected to a 4K display would simply have their content on a larger scale with window elements spread out. The latest beta release, however, has reportedly unlocked the latest Retina MacBook Pro’s capability to drive 4K Macs with a refresh rate of 60 Hz, but this has not yet been independently confirmed by 9to5Mac.

According to Apple’s website, the latest 2013 Retina MacBook Pro is able to drive 4K displays at 24 Hz or 30 Hz over HDMI, but as the latest beta suggests, this is likely to change.

Also, it is worth noting that Maverick’s built-in support for 4K displays could indicate that Apple has scheduled a high-resolution Thunderbolt display for 2014, which could make sense, since the last refresh was pushed out two years ago.