Citing anonymous sources, French site MacG reports that Apple may refresh its 15-inch MacBook Pro and 27-inch iMac line as early as this Wednesday. Unfortunately, the sources, who have been reliable in the past, couldn’t tell if the refresh targets the Retina or non-Retina iMac. 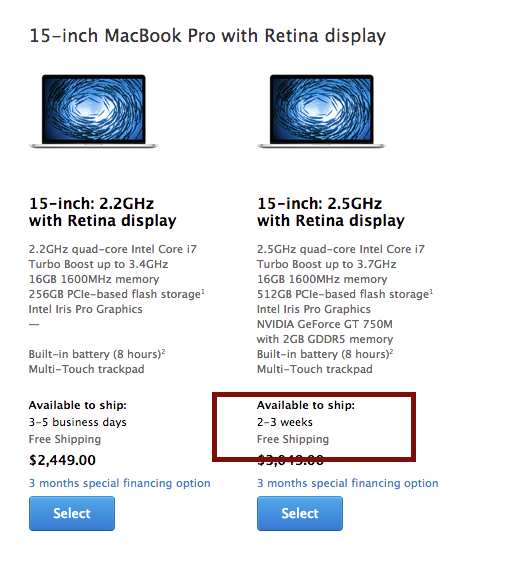 The latest Mac refresh came in March and targeted the 13-inch MacBook Pro, adding the Force Touch trackpad introduced with the 12-inch MacBook. A quick look at the online Apple Store reveals that the higher-end, 15-inch Retina MacBook Pro’s delivery has time slipped to 2–3 weeks.

We noticed the same with the iMac: The higher-end iMac (27-inch, 3.4 GHz quad-core Intel Core i5 Turbo Boost up to 3.8 GHz) is available to ship in 1–2 weeks compared to the other models, which all are in stock.