Apple apparently plans to design, build and test custom chips for future devices in Orlando, Florida, according to AppleInsider, which points to new listings on the Apple Jobs page. The company listed several positions related to developing and testing processor and mobile graphics hardware.

A notable position listed on the web site is for a reference model engineer specialized in “modeling GPU hardware”, while another mentions running the iOS platform on “pre-silicon platforms”, which likely relates to Apple’s custom SoC that powers its iDevices. 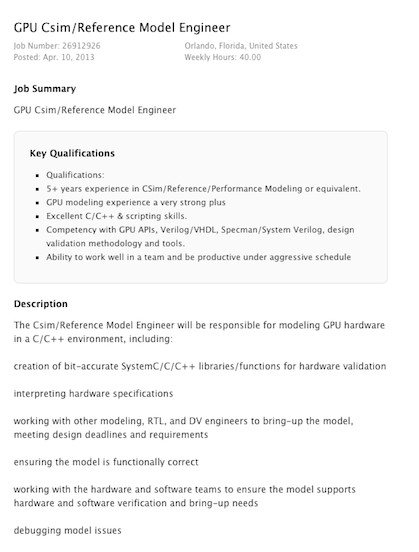 What drew AppleInsider’s attention is that these job listings name Florida as their location, suggesting that Apple plans to expand its hardware development in Central Florida area.

You may recall that Apple has acquired Authentec, a fingerprint scanning technology maker. Now the interesting point is that Apple’s acquisition is headquartered in Melbourne, Florida, about an hour south of Orlando.

Putting the pieces together, you get the full picture: Apple has already advertised the open positions for its Melbourne Design Center – most likely Authentec – and with these new listings, it is growing its presence in Florida.