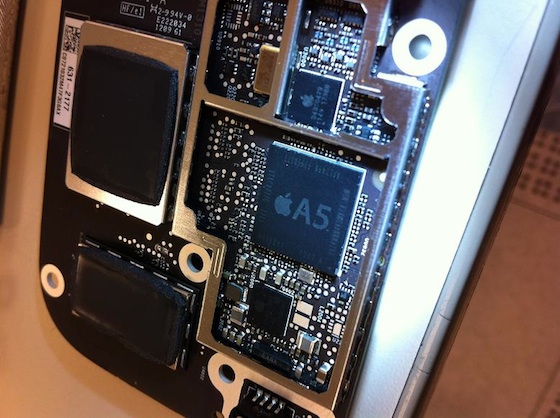 Although the main focus has been on the new iPad this past week, Apple also released the latest version of their media streaming device, Apple TV. The 3rd generation of the Apple TV is being promoted as being upgraded to 1080p video.

MacRumors is reporting that a recent teardown of the new Apple TV reveals a couple of interesting things. After identifying certain markings and serial numbers on the components inside, it would seem that the new Apple TV boasts 512 MB of RAM, which is double that of the previous model. It still has the same 8GB of onboard storage, even though the video size has increased. There also seems to be a second antennae, although they couldn’t really identify what this was used for. Possibly just better WiFi performance.

The processor inside the new Apple TV’s A5 package is identified as APL2498, indicating a variation on the APL0498 processor found in the standard dual-core A5. The part number for the RAM included in the chip suggests that it is a 512 MB chip from Hynix, a boost from the 256 MB of RAM found in the A4 package on the previous-generation Apple TV.

As for flash storage, the format of the part number stamped on the chip implies that it is an 8 GB part from Toshiba, meaning that the device carries the same storage capacity as found in the previous-generation model. Given that the Apple TV is a streaming-only device, on-board storage is only required to support the operating system and buffering of streaming content.

So, that being said, is it really worth it to upgrade, if you already have the second generation Apple TV? In my opinion, no. If you really want 1080p video, you’re going to have to upgrade, but I think 1080i or 720p looks just fine.

If you picked up the new Apple TV, let us know if you’ve seen any vast improvements over the previous model.