There are mixed opinions right now on the battery life of Apple’s 2016 MacBook Pro models with and without Touch Bar. Many users have been critical their battery life has been far short of Apple’s advertised 10 hours, with some tweeting Apple SVP Phil Schiller with their concerns.

Recently, Phil Schiller has been responding to tweets of poor MacBook Pro battery life (some are noting 3 hours out of the box), suggesting users read the following support document, particularly the section on “Setting up your Mac for the first time”. 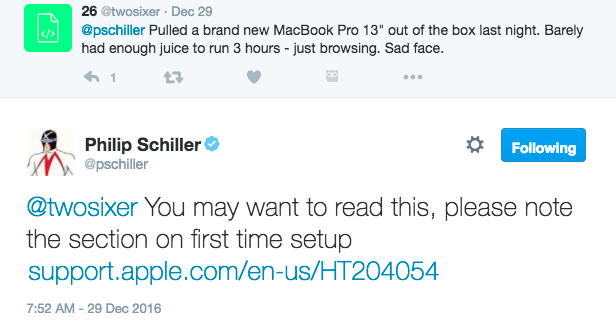 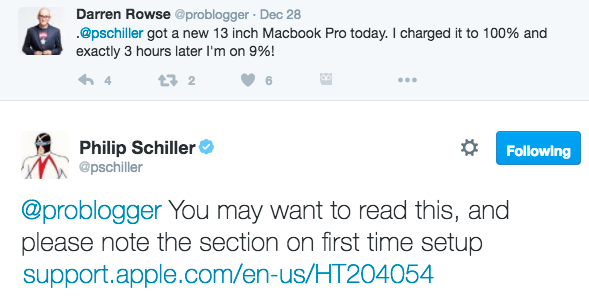 Here’s what it says:

When you set up your Mac for the first time, some activities—like setting up Mail and Photos, downloading your files from iCloud, and indexing your files with Spotlight—can use more power than your Mac requires in general use.

If you have a large amount of data to transfer over Wi-Fi, it might take a few days for your Mac to finish its setup process. It’s best to keep your computer connected to a power source during this time. Once setup is complete, the battery life will begin to reflect the regular activities you perform on your Mac.

Essentially, one culprit of sapping your battery life is iCloud, which would be downloading files such as images to Photos and emails to Mail, while Spotlight’s indexing process will also “use more power than your Mac requires in general use.”

Apple suggests keeping your MacBook Pro plugged in for “a few days” if you have large amounts of data to transfer over Wi-Fi.

It makes sense, but even with our 13-inch MacBook Pro with Touch Bar having complete its iCloud downloads and Spotlight indexing, our battery life is still at or below five hours of usage, with the latest macOS Sierra 10.12.2 update, far below Apple’s advertised 10 hours.

Schiller has also asked users to private message him so his team could help “investigate” 2016 MacBook Pro battery issues.

Consumer Reports recently released their report on MacBook Pro battery life, saying it was “very inconsistent”. Apple is currently working with Consumer Reports to “understand their battery tests.” In a recent inquiry by 9to5Mac, the consumer testing group said it doesn’t believe re-running tests “are warranted for several reasons.”

How’s your battery life on your MacBook Pro with Touch Bar?