This mornings Apple product updates regarding the iMac, the MacBook, the Mac Mini, the new Magic Mouse, and Apple Remote were all fantastic. But there were a few products that were updated that have been not so publicized. 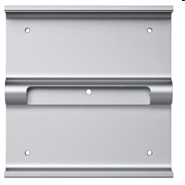