Microsoft has launched its October software update for Xbox consoles. This month’s update includes a Night Mode option for all Xbox consoles and 4K dashboards for Xbox Series X/S and more. Announced via Xbox Wire, Jonathan Hildebrandt, Principal Program Manager of Xbox Experiences, stated that the update would be rolling out to all users.

As we draw closer to the first anniversary of the Xbox Series X/S, the release of 4K dashboards couldn’t have come at a better time. Although the consoles have been on the market for many months, 4K dashboards are something that was strangely omitted at launch. Not that it’s revolutionary to the UI experience on Xbox Series X/S, but the update from 1080p to 4K does give a cleaner look when navigating the console’s dashboard. Game art, buttons, and UI elements on the Home, My Games & Apps, Guide, other menus have been updated to increase sharpness and text readability. 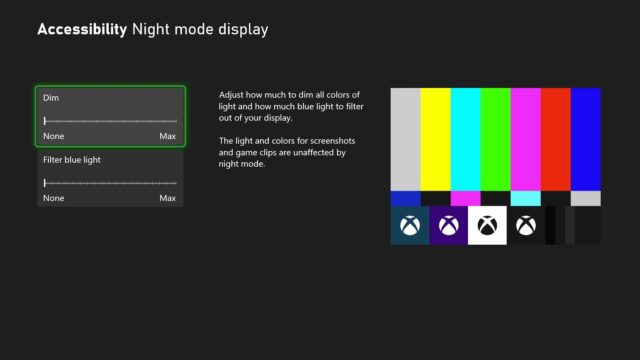 Additionally, Night Mode options have rolled out to all Xbox consoles. By navigating to the ‘Accessibility’ settings menu, users can now dim and customize the blue light that the console is displaying on. The light from the Xbox controller’s power button and the console itself can also be customized. Night Mode schedules can also be created to dynamically switch between Dark and Light themes. Users can also sync it with the sunrise or sunset. Hildebrandt assured users that Night Mode will not impact screenshots or game clips.

Finally, Microsoft’s October update adds the Quick Settings menu to the Xbox Guide. This makes it easier to access and customize accessibility settings. Users can now toggle accessibility features without leaving a game or app. These settings can be easily toggled on or off depending on who is currently using the console and the needs of the user.