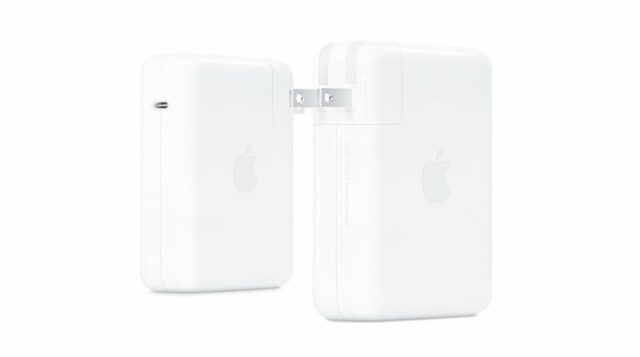 Apple boasted about how efficient its new MacBook Pro laptops are during their debut yesterday, but it takes Apple’s most power-hungry laptop charger, a beefy 140-watt brick, to top up the biggest of the new laptops.

The charger is Apple’s first to employ gallium nitride, or GaN, the Cupertino company confirmed to The Verge. GaN is a material that allows for higher voltage capacity and reduced energy loss due to heat.

As the report notes, the hefty new charger will work across a range of devices that support the USB-C PD 3.1 standard, not just your MacBook. Because the standard works both ways it also means you’ll be able to use third-party charging accessories to charge your new MacBook.

Alongside the awesome new M1 Pro and M1 Max Apple silicon and a new 120Hz mini-LED display, the new MacBook Pro gets big battery life improvements on the old 16-inch Intel Pro. The 14-inch device can do 17 hours of video playback, whilst the 16-inch is good for up to 21 hours. Apple also says the performance won’t drop off when the MacBook isn’t plugged in.

In this week's edition of his Power On newsletter, Bloomberg's Mark Gurman speculated that Apple could launch an even pricier iPhone model, positioned above the "Pro Max," as early as 2024. The renowned analyst previously reported that Apple could rename this year's iPhone 15 Pro Max the iPhone 15 "Ultra." However, he now believes the company is...
Nehal Malik
47 mins ago