Canada’s AgileBits, the developers of popular password manager, 1Password, have shown off one of Apple’s new APIs in iOS 12. 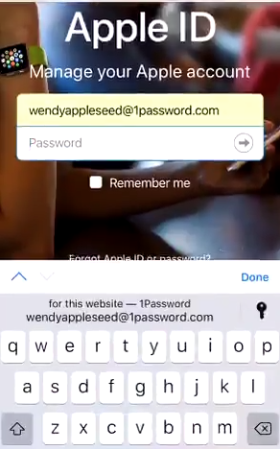 Apple announced in iOS 12 developers would gain access to a new API called Password Manager, which will let users “access passwords stored in third-party password managers directly from the QuickType bar in apps and in Safari (requires third-party adoption).”

The 1Password team was quick to adopt this new API and showed off just how well it works in iOS 12, with a video on Twitter, seen below:

What a wonderful present for us at WWDC this year! Thank you to all our friends at Apple for this great new API. #1PasswordAutofill pic.twitter.com/jpvRVogslS

Normally, when you’re visiting a website in Safari and need to log in with credentials via 1Password, you need to tap the Share sheet icon, tap 1Password and then tap your login. But now, with this new Password Manager API, your third-party password app just shows up in Safari and only needs authentication via Face ID or Touch ID, saving time.

In iOS 12, Apple will also allow easy sharing of passwords between iOS devices and also to a Mac and to an Apple TV. Also coming is security code AutoFill, which automatically fills in one-time passcodes received via text messages.

1Password is always quick to adopt new APIs in iOS. Last year, the team quickly showed off how Face ID would work with the app on iPhone X, ahead of the latter’s launch in the fall.

Inspired by a true story, Will Smith’s new movie Emancipation is now available to watch on Apple TV+. The movie tells the story of a man who fights through unthinkable terrors in an attempt to reunite with his family. The movie debuted in theaters on December 2, but Apple TV+ subscribers can now stream it...
Usman Qureshi
18 mins ago

While speaking to The Verge, CEO of Epic Games Tim Sweeney has said that Apple’s ability to reject apps like Twitter is something “every politician should fear,” no matter what side of the aisle they’re on. “I think it’s incredibly dangerous to allow the world’s most powerful corporation to decide who is allowed to say...
Usman Qureshi
30 mins ago

Apple supplier Foxconn has invested $500 million USD in its Indian subsidiary to increase its production capacity in the country, according to documents filed in the Taiwan Stock Exchange (via South China Morning Post). The move comes as Apple urges its partners to accelerate plans to diversify the iPhone maker's supply chain beyond China. Foxconn...
Nehal Malik
37 mins ago