We’ve already seen a teardown of Apple’s all new iPad Pro released earlier this month at WWDC, as well as its unboxing and first impressions revealing that the performance of the new A10X Fusion chip is extraordinarily fast. Now, the folks over at BareFeats have published a bunch of performance benchmarks, comparing the 2017 iPad Pro models with the 2016 and 2017 MacBook Pros with 13-inch display, and the results are quite striking. 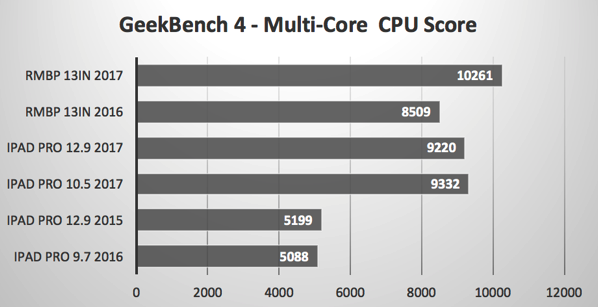 The 2016 and 2017 MacBook Pro with Touch Bar models were pitted against four different iPad Pro models, in a series of GeekBench and GFXBench performance tests. Below are the specs of all the MacBook Pro and iPad Pro models compared: 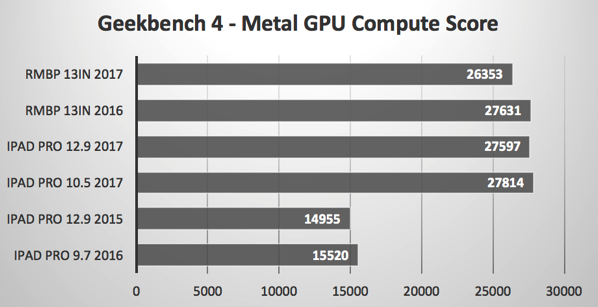 Most impressive were the Geekbench metal GPU tests, where the 10.5-inch iPad Pro beat out all other devices, including the MacBook Pro. The newest 12.9-inch model came in second, followed by the 2016 MacBook Pro, whereas the 2017 MacBook Pro came in at fourth.

Here’s what the testers wrote:

I am not implying that the iPad Pro can replace the MacBook Pro. They are two different animals, though there is clearly some overlap in capability. It’s just encouraging to know that the iPad Pro development has brought it up to laptop level performance.

So who’s selling his MacBook Pro to get the latest iPad Pro?