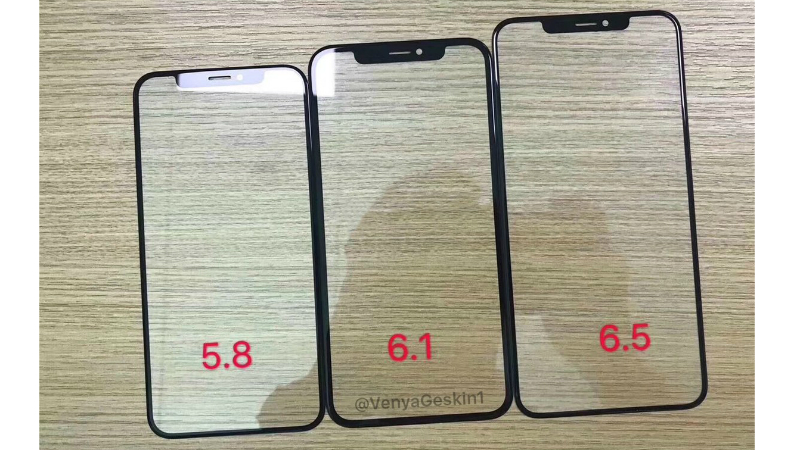 Apple is expected to bring three new iPhones this year that will primarily be different from each other in terms of screen sizes. According to several market watchers and analysts, the iPhone series will include a cheaper 6.1-inch LCD model and two OLED models with a 5.8-inch display, and a 6.5-inch screen.

Now, a new image, leaked today by tipster Ben Geskin, purportedly shows the glass panels of all the three upcoming iPhone models, leading one to believe the upcoming iPhone models will all feature near edge-to-edge displays and iPhone X-style notches to accommodate a TrueDepth camera for Face ID and animoji.

The glass panels apparently confirm that new models will look similar to the iPhone X — at least from the front. Further, it is safe to say that even the LCD variant this year will have thin bezels.

It is indeed worth noting here that there is a minimal increase in the thickness of the 6.1-inch glass panel. Unlike OLED panels, LCD panels cannot have super thin bezels due to technological limitations. Apple is using a number of new technologies to cut down on the bezel size, but from the leaked image, it looks like it is still not going to be enough to bridge the gap between the two display technologies.

Nevertheless, using LCD on the 6.1-inch phone should allow Apple to sell the model at a cheaper price, likely between $550 and $700 USD.

The leak doesn’t give much else away, beyond confirming that all three models will adopt a notched design to facilitate Apple’s Face ID tech.

Apple is expected to announce the three phones at an event sometime in September, and they will go on sale shortly after.