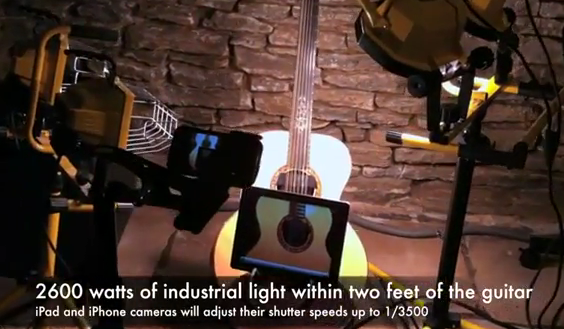 The last time we saw a neat video of guitar string oscillations was when the iPhone was dropped inside a guitar. You can actually do the same externally, as shown in the following video posted by TUAW:

Powered by 2600 watts of commercial strength light, it allowed Mike Salovich to capture the oscillation of his guitar strings externally. This is accomplished as the bright lights slow both the iPhone and iPad’s shutter speed down to 1/3500. You need to have the proper orientation of both devices to achieve the effect:

The key was to focus intense light at the guitar so the camera automagically increased the shutter speed. I don’t believe anyone can manually set an IOS camera. I added more and more light until I was successful with 2600 watts coming from two sets of industrial lights. It was extremely hot.

The other key is to orient the iPad and iPhone vertically so the rolling shutter effect happens. If you hold the iPad or iPhone wrong, you will not see the oscillations no matter how much light you have.

So the oscillating guitar video technique is:

I made the video clip with one camera angle – there a lot of angles you can use. Probably the most dramatic is straight on. Plus there are probably better light sources that would amplify the oscillations. You need to be careful to avoid light glare or to burn your self or ruin your guitar.

I used an iPad 2 and an iPhone 4, and I bet this works with other iPhones.

Oh, if you’re going to try this, don’t forget the sunglasses.