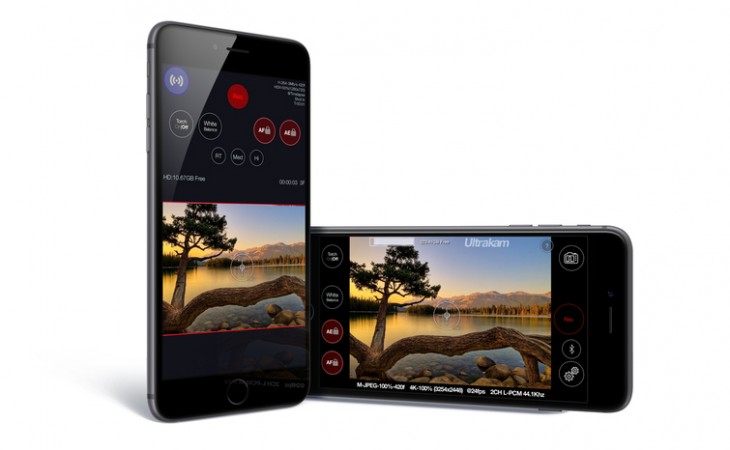 Ultrakam has today released a new app capable of shooting 4K resolution video on the iPhone 6 and iPhone 6 Plus, in an attempt to compete with the likes of the GoPro Hero4, the Sony F55 CineAlta 4K and other 4K video cameras, The Next Web reports. While the app is targeted at professional videographers, it is easy enough to learn for videographers of all skill levels.

“For me, Ultrakam 4K is how I really wanted to do the original Ultrakam, but previous hardware and software limitations didn’t allow it to be,” Hassan Uriostegui, Ultrakam’s developer told TNW. “We believe that with the newest iPhone 6 and 6 Plus hardware and iOS 8,  iPhoneography is receiving an amazing push forward to be a serious deal, given the advances both in image quality and disk storage.”

The new Ultrakam 4K video shooting app comes with its own companion app to use as a remote video monitor, which can control the app’s production features. The app captures 4K video at 50MB/s, using the MJPEG codec to capture 8MP video at 3264 x 2448 pixels. At this rate, a 128GB iPhone can hold more than 30 minutes of 4K video at super high quality, which would allow longer sequences before having to transfer data.

Users can manually adjust focus, shutter and ISO speed, while Ultrakam also offers capabilities such as time-lapse and up to 20x slow motion. You can download the app and free remote control companion for iPhone 6 and 6 Plus in the App Store for $9.99. Meanwhile, check out the following 4K video shot with Ultrakam.