Back in August 2020, the $49.8 million Canadian CRT class action settlement announced it was ready to start sending out payments, 21 months after the case was approved.

The class action was related to alleged price-fixing by numerous makers of cathode ray tube (CRT) monitors in Canada, involving companies such as Samsung, Panasonic, Toshiba, Hitachi, LG and more.

Now, just when you thought payment was coming—not so fast. On Thursday afternoon, the Canadian CRT Class Action emailed class members to say e-Transfer payments are forthcoming. The delay was “due to class member appeals,” says the class action, adding “we apologize for this delay.” 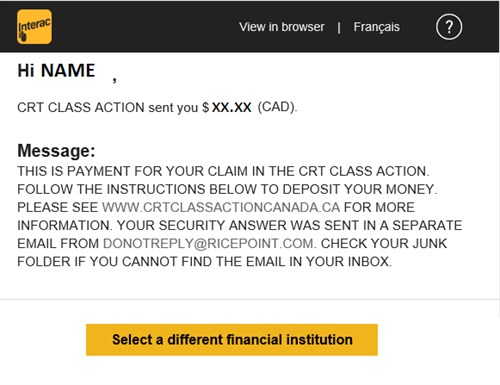 The email says an Interac e-Transfer is coming and those without auto deposit set up will have to enter their security answer, which was provided in the email as well. The CRT Class Action says “it is anticipated that all claims will receive a minimum payment of $20.”

Did you get paid today from this CRT Class Action?