Apple may release a cheaper, 8 GB version of the iPhone 5C tomorrow, March 17, according to a (questionable) note to retailers from Vodafone’s Germany-based O2 unit obtained by Caschys Blog (via AppleInsider). 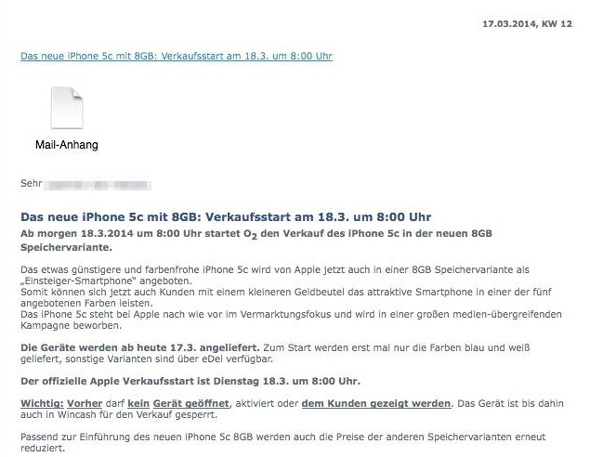 Although there is no other evidence of an 8 GB iPhone 5c yet, it will be about €60 cheaper than the currently available 16 GB model listed at €569.

What’s interesting, though, is that Apple already has a “cheaper” version of the iPhone 4S currently listed at €399 (8 GB model) in Apple’s official German online store, although we are talking about technology that is more than two years old

The launch of a cheaper iPhone 5c could mean another boost for the device as it is said to be available in more colours. The question that remains, though, is: how will this affect the sales of the 8 GB iPhone 4, used to target emerging markets.

Fact is, sales of the iPhone 5c have been lower than projected, despite analysts claiming that Apple is using a long-term strategy with the plastic device. An 8 GB model would allow the company to boost sales by lowering the price so that it fits the budget of future iPhone owners.

The Dyson V12 Detect Slim makes some significant quality of life improvements while not compromising on power. I’ve been using Dyson vacuums for the better part of three years. Across many of its previous cordless devices, I’ve been thoroughly impressed. Dyson typically delivers when it comes to power and suction. Plus, I’ve often found battery...
Steve Vegvari
32 mins ago