Earlier today the Apple Store app was updated to include support for Canada, and to also debut the new self-checkout feature called EasyPay (U.S. only at the moment).

Curious to know how this self-managed system works for accessory purchases? The Mac Observer went hands on today with the feature to purchase a $200 accessory. Users will first have to connect to in-store Apple Wi-Fi, then access EasyPay within the Apple Store app.

Here are their observations of EasyPay:

Using your phone’s camera, scan the barcode of any product on display. The app then brings up the product information, including price, pictures, and user reviews. A large green button at the bottom of the screen begs you to purchase the product and, conveniently, gives you the total cost including local sales tax. Pressing “Pay Now” automatically charges the card associated with your Apple.com store account. Thankfully, for those prone to losing their phone, the app does ask for the three or four digit security code before completing the transaction.
It takes just a second to complete the purchase, and you’re then presented with a thank you screen and access to a PDF version of your receipt.

Product purchased, we looked around, feeling a little odd about having not worked with an employee, and then walked out of the store. Not a single employee nor the uniformed security door gave us a second look, despite the fact that we were walking out with an $200+ product under our arm. 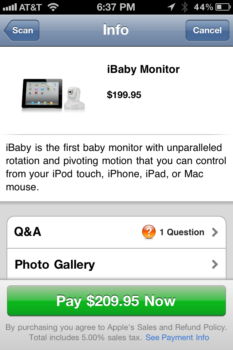 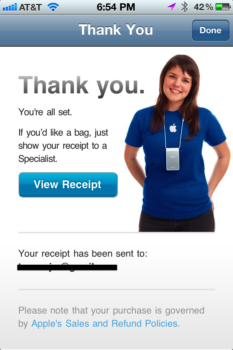 So, as you can see they were able to purchase a $200 item without being questioned by staff on their way out (the app even instructs you to ask for a bag, if you require one).

It’ll be curious to see how EasyPay will affect the occurrences of shoplifting, as customers will be walking in and out of stores at will. I have a strong inclination EasyPay (or EasyTheft?!) will be quite popular this holiday season.