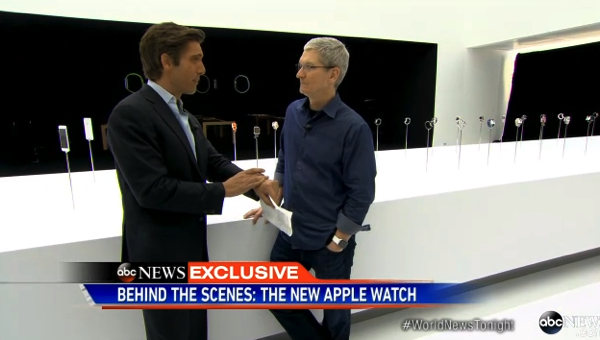 As promised, ABC has aired its first behind the scenes look at Apple’s special event today, getting access to CEO Tim Cook. The Apple leader, while sporting the Apple Watch, told ABC anchor David Muir “You can do a lot with your wrist,” followed by “A lot more now.”

Cook also told Muir the Apple Watch comes in two sizes, either at 38mm or 42mm in height, with different sizes of straps, allowing for a variety of customization for its customers:

“[The wrist is] a very interesting place because it’s, you can obviously glance with it, you can’t glance at a lot of other places on your body,” Cook told Muir. “You can measure a lot of things from there and you can just get, honestly, a tidbit today of what all it can do. But I think it’s huge.”

In regards to Apple Pay, which will store credit card and payment credentials on the new chip called Secure Element, Cook described the enclave as “It’s incredibly safe,” while also saying confidently “I feel incredibly certain that it’s very secure — the most secure thing out there.” He also said he helped “put a dagger” in the physical wallet.

Muir also got his chance to try out Apple Watch, and sent his first tweet from the wearable:

How fun to send the first tweet ever from an Apple Watch. See you tonight.

At the end of the interview, Cook also stated how ‘Made in America’ is very important to him still, and noted 22 out of 50 U.S. states are involved with parts, materials or equipment related to iPhone 6 or Apple Watch.

Check out the 3 minute and 20 second long clip below:

Cook also said while Apple isn’t the first to launch a watch, they also weren’t first to launch the iPod—which revolutionized digital music. Earlier, a clip was shared by ABC where Muir asked Cook about Steve Jobs.

SaskTel is partnering with South Saskatchewan Ready (SSR) to bring the infiNET service to four communities in Southern Saskatchewan. The partnership will expand the SaskTel infiNET service, Saskatchewan’s largest fibre broadband network, to the following communities: Bengough Coronach Rockglen Willow Bunch The project is being facilitated through SaskTel’s Community Participation Program, which has been utilized by over...
Usman Qureshi
3 mins ago

Despite engineering delays, Apple is said to be continuing work on full reverse wireless charging support for the next-generation iPhone (via 9to5Mac). (Concept image: via EverythingApplePro) Citing sources familiar with the matter, the report notes that Apple was expecting to introduce the feature with the iPhone 14 Pro, but it missed the deadline. However, the...
Usman Qureshi
15 mins ago