As pointed out by PetaPixel, Adobe’s Creative Cloud for Photoshop and Lightroom subscription plans now start at $19.99/month as the previous $9.99/month plan can no longer be found on the company’s website.

Adobe first offered a $9.99/month Creative Cloud bundle of Photoshop and Lightroom back in 2013 as a special limited time deal, but since the plan was so popular among photographers, Adobe continued offering it as a permanent option after the deal expired. 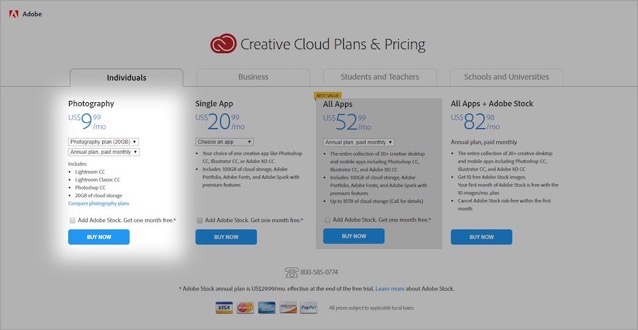 However, $9.99/month for 20GB of storage has now vanished for many customers and only the $19.99/month with 1TB cloud storage is being offered. An Adobe representative has also confirmed that the $10 plan is no longer being offered to all customers.

Luckily though, there’s still a trick that lets you subscribe to the old $9.99/month for 20GB plan:

Simply contact Adobe Sales through phone (866-493-4989) or the online chat (the chat bubble in the bottom right corner of the page) and they can still sell you the $10/month plan (for now).

The rep tells PetaPixel that the $20/month minimum price hasn’t been set in stone yet, and there’s no word on whether or not Adobe will be making it a permanent price hike that’ll double the software cost for photographers.

For now, the old $10/month plan can also be subscribed through this direct link.

Apple has highlighted some accessibility features available on its devices such as iPhone and Mac, using YouTube Shorts to do so (hence the portrait orientation). The company demonstrated Sound Recognition and Facial expression switches by reaching out to social media influencers such as Scarlet May and Illy Willie. The videos below were showcased on Saturday: […]
Gary Ng
10 mins ago