After Hiring Comex, Is Apple Looking To Appoint MuscleNerd Next?

We all know master iOS jailbreaker Nicholas Allegra a.k.a @Comex was hired by Apple as an intern a few weeks ago. But looking at a picture (shown below) tweeted by Dev-Team member @MuscleNerd, it seems as if Apple is trying to grab another iPhone hacking genius ahead of the iOS 5 / iPhone 5 launch. He tweeted this photo during his recent trip to San Francisco where he made a visit to Apple’s campus and was given a visitor’s name tag saying “MuscleNerd” instead of his real name, which is also not yet known to any of us either.

As published by modmyi:

For now, all MuscleNerd would admit to on Twitter is that he visited the prominent campus. “Well this afternoon sure was fun… (what a great company!)…,” he tweeted, including a picture of himself wearing a t-shirt that reads: “I visited the Apple campus. But that’s all I’m allowed to say.”

He subsequently tweeted: “my host at Apple surprised me with that visitor’s name tag…I had expected it to be my real name :).”

“Without Allegra and MuscleNerd, the elite community of iPhone hackers known as the iPhone Dev Team will be significantly crippled.”

Check out the photo showing Apple Store t-shirt and name tag MuscleNerd below and tell us what you think Apple is really up to? 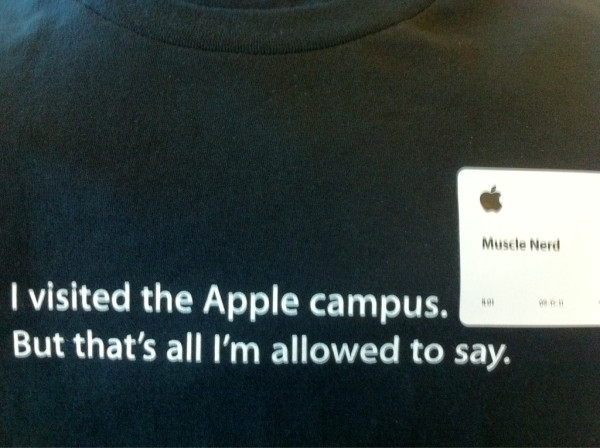