A new teardown of the recently-released third generation of AirPods has been released. 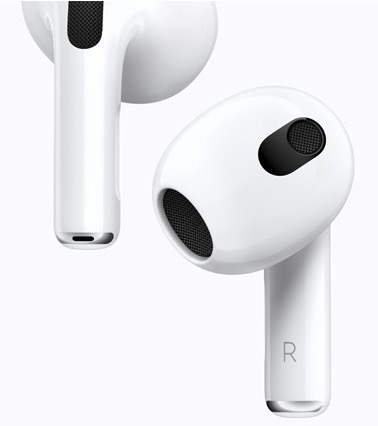 Performed by YouTuber 52audio, the short unboxing and teardown video shows how the new wireless earbuds as well as the charging case have improved over its predecessor.

“The design of AirPods 3 is closer to Apple’s AirPods Pro, which adopts the… in-ear design,” says 52audio. “But actually the internal structure is very different from AirPods Pro.”

Each earpiece of the AirPods 3 contains a new skin detection sensor, a first for AirPods. An FPC cable is used to connect all the components to a small battery located between the speaker housing and the microphone. This battery has a rated capacity of 133mWh, a step up from the AirPods 2’s 93mWh capacity.

As for the charging case, a new set of magnets used to attach the case to the MagSafe charger were found in it. No other AirPods have had this feature yet. The case contains the Lightning port, logic board, and a single 345mAh battery that’s smaller than the AirPods 2’s 398mAh battery.

The case also has a graphite thermal pad to distribute and dissipate heat that would be generated during charging. Interestingly, the AirPods 3 charging case has one large battery instead of two separate, smaller batteries seen in the AirPods Pro charging case.

The new AirPods bring a host of improvements over their predecessor, featuring spatial audio with dynamic head tracking, sweat and water resistance, and a MagSafe charging case. Additionally, the battery life of the AirPods has increased to six hours, rising to 30 hours when factoring in the additional charges in the carrying case.