Will AirPods fall out while running or jogging? Avid runner and Australian Daniel Garcia put his AirPods to the test during sprints, in the heat and wind and up and down a mountain, and the wireless earbuds never fell out of his ears (via 9to5Mac):

So in my run today I sprinted, ran down and up a mountain, in the heat and wind and more.
I filmed the process (and some sexy Hasselhoff slow-motion of course) and here it is with my review and thoughts at the end. Hope this helps the rest of you.

Garcia says Apple’s EarPods “never fit me well”, but it was a different story with AirPods. Before, he would normally wear Jaybird X2 wireless headphones on runs, but noted he was never really happy with the fit. He recorded the AirPods in ears while running at a regular pace, paired to his iPhone 7 Plus at the time. 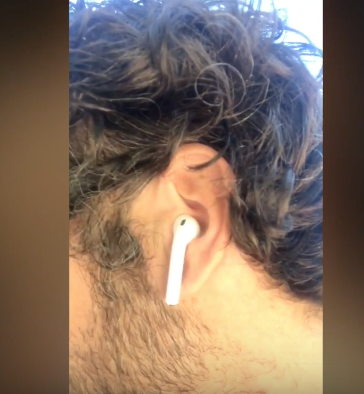 As for perspiration concerns, he ran in 28C weather and said they did not get loose in any way, and remained dry, which he suspected was attributed to windy conditions.

Leading up to the launch of AirPods, we had already heard press reviewers able to put the wireless headphones to the ‘dance’ and ‘head shake’ tests, successfully. Now we get to see some public examples of AirPods staying in ears, too.

Even Apple CEO Tim Cook had stated back in September, to ABC News, “I’ve been wearing them for a while, and because they don’t have wires on them, the wires tend to help the earbuds to fall out, right, because it applies weight on those. By snipping the wires, I have never personally, had one fall out.”

Apple Stores launched limited sales today across Canada, with many people waiting in line taking their chances on stock, as online sales today will deliver in six weeks time.