Offering a cashier-free, app-based food shopping experience, Amazon’s new grocery store “Amazon Go” has been launched in beta among the company’s employees in Seattle using “Just Walk Out” technology. Debuted at a single 1,800 square foot location in Seattle, it lets customers use the Go app to enter the store, while the app’s virtual shopping cart records items picked up, even recognizing when an item is put back on a shelf (via TechCrunch). 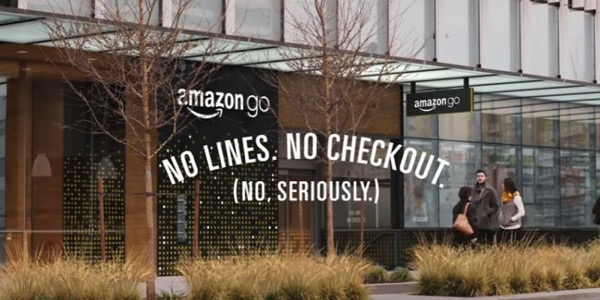 The Amazon Go app uses a system of advanced algorithms and sensors to record selected products. Leaving the store prompts automatic payment, and the app sends the user a receipt for their purchases. According to the company, the store has been in the works for four years. Last year, the company also opened Amazon Books, a then one-off bookstore also based in Seattle.

“We asked ourselves: what if we could create a shopping experience with no lines and no checkout?” says Amazon on the official Go site. “Could we push the boundaries of computer vision and machine learning to create a store where customers could simply take what they want and go?”

In its current form, the sole retail location is built specifically around meals — sounding more like an early 21st century version of an automat than a full-fledged grocery store, revolving around ready-to-eat meals and snacks prepared on-site (by humans, not robots, incidentally) along with Amazon Meal Kits that split the difference with 30 minute meal prep.

The company has yet to confirm when or whether Amazon Go might be rolled out elsewhere. In the meantime, check out the following video for a better idea:

The Roku Channel has shared its list of free movies and TV shows hitting the ad-powered streaming service in Canada for October 2022. Check out the full list below Movies The Death and Life of John F Donovan The Intruders Mama Rhymes for Young Ghouls Wolves The Woman In Black Alaskan Nets The Delinquent Season […]
Gary Ng
21 mins ago