‘Amazon Go’, the company’s first brick-and-mortar convenience store which is being referred to by many as “the store of the future” as it allows customers to grab items and just walk out without stopping to pay, finally opens to the public today on the ground floor of Amazon’s new headquarters on Seventh Avenue in Seattle, ReCode is reporting. 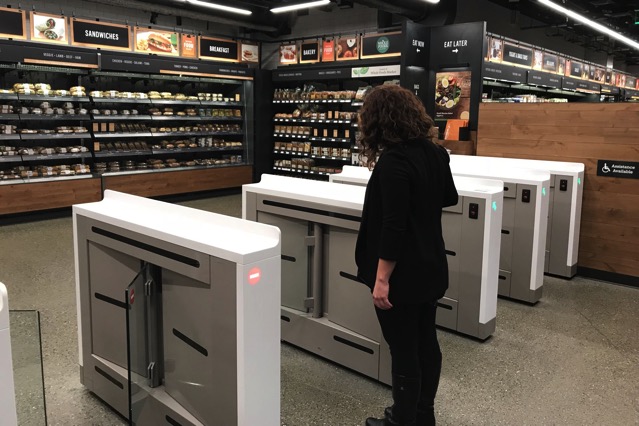 When shoppers enter the Amazon Go store, they are greeted by a selection of salads, sandwiches and beverages, as well as ready-to-eat meals for breakfasts, lunches and dinners. Following Amazon’s acquisition of Whole Foods, one section is also set aside for chips, cookies and nuts, all from the grocer’s 365 Everyday Value brand.

The store is outfitted with modern technology that enables shoppers to simply grab items off shelves and automatically get charged the right amount without stopping to pay upon exit, which means no lines and no cashiers.

How? The store is outfitted with cameras and shelf sensors to help Amazon’s computer vision system work some magic. The technologies, in turn, connect you and the phone you scanned at the entrance with the items you took from shelves and carried out the door. On rare occasions, a human is needed to confirm that the technology got it right.

On my visit to the store last week, the technology charged me correctly after I entered, grabbed a sparkling beverage and exited — all in less than one minute. The real tests, however, will come during normal shopping days when, say, the store gets crowded, or an item is removed from one shelf and placed on another, or two people who have similar appearances are shopping in close proximity to each other.

Amazon says the company would like to open up more Amazon Go stores, but is currently focused on this one for the time being.