Analysts are Bullish on Sky High iPhone Sales for Q2 2015

Another quarter has ended on March 31 and today Apple is going to announce its earnings. Of course, analysts are eager to find out how many iPhones the company sold during the three month period, but we’ll have to wait a little while until the official numbers are in. As usual Philip-Elmer DeWitt of Fortune has put together a list of the best and worst analyst estimates for the past quarter.

The table consists of estimates from professionals (blue) and independents (green) analysts. Of course, independent analysts appear to be more bullish regarding the iPhone sales — the device accounts for more than half of Apple’s revenue — with estimates going as high as 65 million and as low as 53.3 million.

Pros are more “sceptical”, but Sundeep Bajikar of Jefferies has high expectations for iPhone sales: his conclusion is 60 million iPhone units, 12 million iPads, 4.5 million Macs. The lowest pro estimate comes from Walter Piecyk of BTIG, with 50 million iPhones, though much higher iPad sales at 15 million. 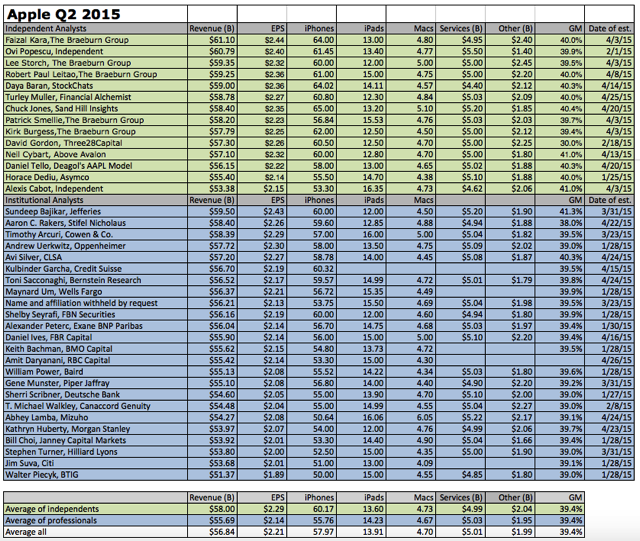